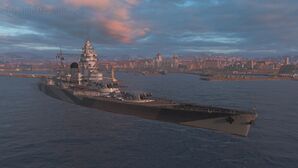 A "small battleship" of the Dunkerque class that was created to confront German raiders. Compared to the lead ship of the series, she had reinforced armor protection and was a little slower.

Strasbourg is to Dunkerque as Jean Bart is to Richelieu. Strasbourg is a maneuverable French battleship outfitted with powerful forward facing 330mm guns. The main difference between her and her sister, Dunkerque, is the addition of the Main Battery Reload Booster

, a unique consumable for a Tier VII battleship.

Strasbourg has a mediocre health pool of 52,600, decent torpedo damage reduction for her tier (25%), alongside a weak overall armor scheme. She is covered in 26mm plating, from her bow, aft, deck, and midsection. While she possesses the turtleback armor of French battleships, players should be careful about exposing her broadside as her armor will not stop full penetrations when not sufficiently angled. In higher tier matches, battleships with guns greater than 356mm will overmatch her armor regardless of angle. However, 26mm armor is enough to stop low-caliber high explosive shells from penetrating her armor (excluding the superstructure). Strasbourg relies on her speed to stay alive rather than her health and armor

Strasbourg fires eight 330mm shells per salvo. Her AP shells have good penetration for their caliber and good shell travel time, allowing for the ability to punish broadsides up to her maximum range of 22.9km (with spotter plane consumable). While her HE is not particularly special due to its low caliber, it is useful against angled targets and lighting fires for more damage. The addition of the Main Battery Reload Booster

consumable allows captains to fire shells every 12.5 seconds for 20 seconds of the consumable being active. Strasbourg's {Main Battery Reload Booster} allows her to punish enemy cruisers and battleships in quick succession with her fast shells. However, it only allows one extra salvo to be fired per charge. It also has a longer cooldown than the one found on “Jean Bart” and “Bourgogne” (180 seconds vs 120).

Strasbourg has mediocre AAA. Her anti-aircraft guns reach 6km and provide 2 flak puffs at long range (6km). Her close to medium AA DPS is low, at 126 DPS. Enemy aircraft will have no problems striking through her weak AA batteries. As with many other ships, players will have to rely on allied AA batteries to fend off strikes.

Strasbourg is a fast battleship for her tier. Her high base top speed of 29.5kts is beneficial for versatile play, allowing for flanking maneuvers, positional rotations, and retreating from disadvantageous fights. However, her maneuverability in terms of rudder shift and turning radius is not very impressive, although enough to dodge spotted torpedoes and angle towards shells.

Strasbourg’s role is similar to a battlecruiser, Influencing the match with her strong guns and speed rather than absorbing pressure and damage like a standard battleship.

The addition of the Main Battery Reload Booster

consumable allows Strasbourg to punish enemy cruisers and battleships in quick succession with her fast shells.

Aggressive play is harder to achieve in Strasbourg due to her weak armor and poor concealment. Strasbourg struggles to prevent damage as any battleship with a gun caliber greater than 356mm will penetrate her bow, deck, and stern armor. High tier cruisers generally have increased HE penetration as well, quickly depleting her health pool under sustained focus fire

Strasbourg’s high top speed allows for flexible positioning as she can relocate quickly. She can kite and push her flank quickly when needed and also provide long-range fire support from advantageous angles using her speed.

Strasbourg is best played at mid and long range on flanks, where her concealment and weaker armor are less vulnerable to enemy ships and her strong guns are able to be utilized effectively. Players should look to use her Main Battery Reload Booster consumable against broadside cruisers and battleships, as well as switching to high explosive when the opportunity presents itself. Like other French battleships with smaller caliber rifles, utilizing both ammunition types will bring successful results.

As a premium ship, Strasbourg doesn't have any upgrades to research.

The recommended upgrades for Strasbourg are as follows:

Strasbourg can equip the following consumables:

As a premium ship, Strasbourg comes with Default permanent camouflage and a set of permanent combat bonuses.

Combat signals that increase her durability are must-haves for Strasbourg: India Delta (

Ships of France
Battleships
Retrieved from "http://wiki.wargaming.net/en/index.php?title=Ship:Strasbourg&oldid=322986"
Categories:
Your location:
To log in, select the region where your account is registered
CIS Europe North America Asia
Or use Microsoft Login to enter WoT XBOX ecosystem
Log in