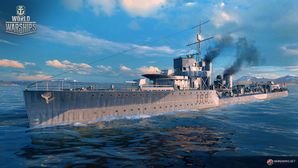 One in a series of advantageous Type 5 flotilla leaders designed and built for the Royal Navy. In 1933, the ship was transferred to the Royal Australian Navy. During World War II, she was slightly upgraded and partially rearmed.

Vampire is a tier III Commonwealth destroyer that combines good maneuverability, great guns, and surprising torpedoes, into a deadly package. Rounding her toolkit off is a decent stealth with the concealment expert commander skill, allowing stealth torpedo attacks on unsuspecting victims.

Her guns are her bread and butter. They have a high rate of fire at 12 rounds a minute, a decent fire chance at 6% (Able to be increased 9% with relevant commander skills and signal flags), and excellent fields of fire for the A, B, and X, turrets, with X turret practically able to fire forward. The AP is very potent as well, having excellent penetration for a 102mm shell, able to citadel cruisers at mid to close range; while also being able to get decent penetration damage on broadside battleships and cruisers at mid to long range.

Her torpedo launcher is a different matter, though one that isn't as bad as the stats may say. She has one triple torpedo launcher able to fire 6km range torpedoes out at enemy ships, the tricky part is the firing patterns. She has two patterns, single launch, and wide spread. Wide spread is great for large groups of enemies, and the single launcher allows precision firing of the torpedoes one at a time at targets. A quick 62s reload has torpedoes in the tubes quickly for the next strike.

Her AA isn't much to write home about, being very weak. The captain should steer clear of aircraft.

Her maneuverability is a dream with a 520m turning circle and 2.5s rudder shift time. She is able to dodge and weave incoming fire very well, and makes retreating from enemies much easier.

) is a key part of her arsenal. Using this she has a 109s uptime for her smoke giving her ample time to fire out of her smoke as she caps, deals damage, or simply retreats.

As a premium ship, Vampire doesn't have any upgrades to research.

The recommended upgrades for Vampire are as follows:

Upgrade Slot 1 provides players with a choice between two viable upgrade options. The first is Main Armaments Modification 1, which improves the survivability and repair time of the ship's main armaments. Alternatively, some players may choose to mount Magazine Modification 1 (

), an upgrade which significantly reduces the chance of detonation.

As a premium ship, Vampire comes included with Type 9 camouflage that lowers her detection radius, reduces the accuracy of incoming shells, and increases the amount of experience she earns. 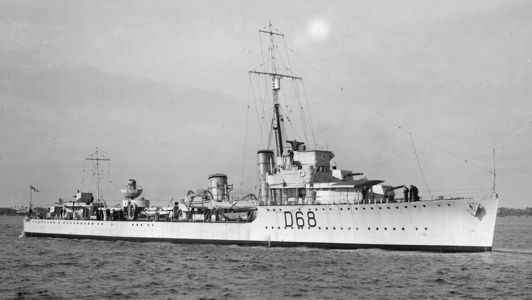 HMAS Vampire before her first deployment to the Mediterranean in 1939.

The V-class Leaders were built under Britain's "Wartime Emergency Programme", so to speed production time they were built using the existing machinery designs of the "R" class destroyers. The R-class was larger than the proposed V-class, so the larger machinery resulted in a higher weight and larger dimensions than originally planned, and further resulted in a decreased top speed of 34 knots.

The original V-class leaders were armed with two twin 21-inch torpedo tubes, and a later modification with two triple 21-inch tubes would become the "W" class. Vampire, however, was initially built as a test bed for the triple tubes, and as such, is still a V-class.

The V-class introduced improvements over previous classes, such as super firing guns in an "A", "B", "X", "Y" layout that would continue to be used for most of the following RN destroyer classes.

Throughout her carrier in the Australian Navy, Vampire went through constant refits in order to maintain the functionality of her systems and update her armaments as the tides of battles changed. Particularly, there was a push to increase her anti-aircraft firepower. A refit in summer of 1941 had installed a single 12-pounder gun for a brief time. Her most extensive refit occurred in January of 1942, where her aft torpedo-tube launcher was removed in order to install two 2-pounder guns in their place.

Ships of Commonwealth
Destroyers
Retrieved from "http://wiki.wargaming.net/en/index.php?title=Ship:Vampire&oldid=268204"
Categories:
Your location:
To log in, select the region where your account is registered
CIS Europe North America Asia Republic of Korea
Or use Microsoft Login to enter WoT XBOX ecosystem
Log in