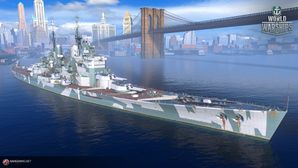 Vanguard is, in more ways than one, an up-tiered Warspite; even so far as possessing identical guns to that of her Tier VI cousin, albeit with improved shells. Like Warspite, Vanguard has excellent maneuverability and main battery accuracy among battleships at her tier, but suffers from comparably weaker armor to her counterparts in the other nations’ tech trees. Even when compared to her tech-tree counterpart, Monarch, Vanguard has a noticeably larger and easier to hit citadel. Like all other British battleships, Vanguard is covered with 32 mm plating which makes her quite vulnerable to heavy cruiser High Explosive shells and IFHE equipped light cruisers and destroyers.

Her main battery is an improved version of that found on Warspite, with similar dispersion characteristics, and the all too familiar turret traverse speed, or lack thereof. Her Armor Piercing shell has a faster muzzle velocity, which allows for an easier time with long-range gunnery. Her High Explosive shell is similar to that of Monarch and other tech-tree British battleships, with high damage and a high fire chance. With only eight guns, Vanguard’s firepower against other battleships, and even some cruisers, often feels anemic. This is offset somewhat by a quick reload of 25 seconds on her main battery, and her aforementioned accuracy.

The largest flaw that captains of Vanguard will find is with her firing angles. Both her forward and rear firing angles are atrocious, requiring significant amounts of broadside to be shown in order to bring all guns to bear on a target. As Vanguard does not possess a well protected citadel (unlike Monarch), showing large amounts of broadside will often lead to catastrophic amounts of damage taken when fired upon by enemy battleships. Captains are encouraged to remain angled with only her fore or aft set of guns on target if there’s any possibility of an enemy returning fire. Luckily, Vanguard’s excellent rudder shift time can allow her to “wiggle” her remaining set of guns onto and off of targets quite quickly.

Vanguard is best played from mid-range, where her lack of armor is less noticeable, and her accurate low-volume firepower can be better put to use. Her slow turret traverse and easily hit citadel make her sub-par at brawling, while her small turning circle and good concealment allow her to disengage quite easily. Fans of Warspite should have no problems playing Vanguard; captains who have no experience with Warspite may struggle with her peculiarities, but she is easy to learn, and is a capable Tier VIII battleship.

) at the cost of a 5% slower reload. For anti-aircraft builds, players should mount AA Guns Modification 2 (

HMS Vanguard was a British fast battleship built during the Second World War and commissioned after the end of the war. She was the biggest and fastest of the Royal Navy's battleships, the last battleship to be launched in the world, and the only ship of her class.
The Royal Navy anticipated being outnumbered by the combined German and Japanese battleships in the early 1940s, and had therefore started building the Lion-class battleships. However the time-consuming construction of the triple-16-inch turrets for the Lion-class would delay their completion until 1943 at the earliest. The British had enough 15-inch (381 mm) guns and turrets in storage to allow one ship of a modified Lion-class design with four twin-15-inch turrets to be completed faster than the Lion-class vessels that had already been laid down.
Work on Vanguard was started and stopped several times during the war, and her design was revised several times during her construction to reflect war experience. These stoppages and changes prevented her from being completed before the end of the war.
Vanguard's first task after completing her sea trial at the end of 1946 was, early the next year, to convey King George VI and his family on the first Royal Tour of South Africa by a reigning monarch. While refitting after her return, she was selected for another Royal Tour of Australia and New Zealand in 1948. This was cancelled due to King George's declining health and Vanguard briefly became flagship of the Mediterranean Fleet in early 1949. After her return home in mid-1949, she became flagship of the Home Fleet Training Squadron. Throughout her career, the battleship usually served as the flagship of any unit to which she was assigned. During the early 1950s, Vanguard was involved in a number of training exercises with NATO forces. In 1953 she participated in Queen Elizabeth II's Coronation Review. While she was refitting in 1955, the Admiralty announced that the ship was going to be put into reserve upon completion of the work. Vanguard was sold for scrap and was broken up beginning in 1960.

The last battleship of the Royal Navy, Vanguard was designed relatively rapidly. Originally, the Royal Navy had planned to match current and future construction of the German, Italian, and Japanese navies with the six ships of the Lion-class, with two ships being included in each budget from 1938 to 1940. Although the two battleships of the 1938 program, Temeraire and Lion, were laid down in June and July of 1939, it became readily apparent that none of the ships would be available until 1943, due to difficulties in manufacturing new 406mm (16”) guns. Because of this, design studies were launched that July in regards to utilizing four twin turrets of the BL 15”/45 Mk.I kept in reserve (from the Courageous-class battlecruisers, which had been rebuilt as aircraft carriers), and Vanguard became a hybrid variant of the Lion-class, utilizing the elderly BL 15”/45 Mk.I. As her construction was halted and restarted multiple times during WWII, she incorporated numerous modifications to reflect the lessons learned by the Royal Navy in the conflict.

Her hull form remained largely the same as that of the Lion-class, which included the utilization of a transom stern, for greater efficiency at high speeds. Thus, despite her weight gains over the process of modification, she retained her 30-knot top speed, making her both the fastest battleship to ever be built by the Royal Navy, but also the only battleship ever built with a transom stern. Operational range was improved by increasing fuel stowage from 3720 tons in the Lion design to 4423 tons, mimicking a similar modification to the King George V-class battleships.

In order to prevent the draft from becoming too deep to traverse the Suez canal, beam was increased by 2.5 meters, and upper 5m part of the main armor belt was thinned by an inch, leaving 356mm abreast the magazines and 343mm abreast the machinery spaces. The lower portion, 2.5m tall, tapered from 356/343mm to 114mm at a bottom edge. The armor belt were connected by 305mm transverse bulkheads and in order to defend against splinter damage from near-missing bombs and shells, a 51mm splinter belt protected the waterline past the citadel, extending stem to stern. Additionally, as a result of the Battle of Denmark Strait, 38mm bulkheads were added to the magazines behind the longitudinal torpedo defense bulkhead for additional protection. The torpedo defense bulkhead was made of two 22mm plates (22 + 22mm) and extended from just fore of ‘A’ barbette to just aft of ‘C’ barbette, where only the 38mm bulkhead protecting the magazines provided defense against torpedo impacts. The horizontal armor was identical to the King George V and Lion-classes, 127mm over the machinery spaces, and 152mm over the magazines. The protection of the main battery turrets was replaced, with 330mm faceplates and 152mm turret roofs. Barbettes were 330mm towards the beam, but tapered to 279mm on the centerline. The protection of the secondary battery was improved in order to protect them from 500-lb. bombs, being increased to 64mm compared to other mounts. Due to the British belief that there was no gain from armor conning towers against heavy shells, armor for it was only proof against splinters and low-caliber shells. The torpedo defense system was also improved over King George V, with the depth being increased from 3.96 meters to 4.57 meters. It designed and extensively tested to resist 1,000 lb. of TNT (454 kg).

The main battery of the Vanguard was made up of eight old but reliable BL 15”/42 Mk.I, mounted in four twin Mk.I/N RP.12 turrets, which were fitted with RPC (Remote Power Control) for training (but not elevation, this stll used the older Follow-the-Pointer system), making Vanguard the first British battleship to have RPC for her main battery. Due to the layout of the turret and turret stalk, it was not possible to reverse the main hoists for shells and charges, which would have prevented the charges being placed below the shell rooms (thus reducing the chance of a shell reaching the propellant and potential triggering a fatal explosion). In order to keep the improved arrangement, an extra set of hoists was added to bring up charges from the propellant magazine, to a special handling room above the shell rooms. Thus, the actual magazines could remain below the shell rooms in spite of the turret stalk arrangement. All structures in the turret were reinforced so that Vanguard could use supercharges for her guns, increasing muzzle velocity from 749mps to 804mps, but these were never issued. Her main battery was controlled by the AFCT (Admiralty Fire Control table) Mk.X, the most advanced version of British surface-fire control available, and was designed from the start to incorporate radar technology. The Fire Control tables were fed by two directors utilizing the Type 274 Fire Control Radar and a 30-foot (9.1-meter) Coincidence rangefinder, the largest ever put in the director of a Royal Navy battleship. The secondary battery was made up of the same dual-purpose 5.25” guns as the King George V-class battleships, but used an improved mounting (RP.10 MK.I*) with greater degrees of automation, allowing the sustained rate of fire to reach nine rounds per minute per gun (versus the previous 7.5 rpmpg). The mounts traversed and elevated twice as fast as the older ones, had full RPC, and utilized the American Mk.37 dual-purpose Fire Control System. Their four directors was equipped with the Type 275 Fire Control Radar. The light AA battery was made up entirely by the famous Bofors 40mm auto-cannon, with over seventy-three barrels in total, most mounted in ten RP.50 sextuple mounts, but also two in STAAG mounts. All these mounts featured RPC and each were directed by a Type 262 fire control radars (for 11 total). Eleven other 40mm Bofors were also mounted in Mk.VII rounds.

Ships of U.K.
Battleships
Retrieved from "http://wiki.wargaming.net/en/index.php?title=Ship:Vanguard&oldid=279722"
Categories:
Your location:
To log in, select the region where your account is registered
CIS Europe North America Asia Republic of Korea
Or use Microsoft Login to enter WoT XBOX ecosystem
Log in