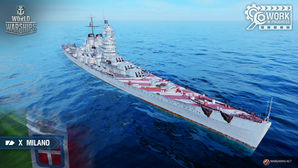 Venezia sits atop the Italian Heavy Cruiser tree as the pinnacle of the gameplay style developed throughout the line. She feature an extra three barrels over Brindisi before her and significantly improved armor (unique penetration angles for her SAP shells were nerfed first, then removed totally). Captains who have made it to the end of the Italian Cruiser line will find Venezia to be an upgrade over previous ships in the line.

The gameplay of Venezia very much revolves around her offensive abilities. With the improved autobounce angles on Italian SAP shells(then removed), seeing damage numbers as high as 12-15,000 on angled cruisers and some battleships is quite common, and against lightly armored ships, numbers as high as 20,000 are completely possible(not anymore, they removed improved angles for SAP shells). Bear in mind that due to the massive alpha strike that Venezia offers, you may saturate areas of the target much faster than using her HE slinging counterparts. This can be dealt with by alternating between the different sections of the target ship. Captains shouldn't discredit her AP shells either; while lacking in penetration, a flat broadside of an enemy cruiser will always be susceptible to the monstrous weight of Venezia's broadside firepower.

As a Tier X ship, Venezia has no modules to research.

Players who wish to spend doubloons can equip Venezia with Type 20 camouflage that lowers her detection radius, reduces the accuracy of incoming shells, reduces her repair costs, and increases the amount of experience she earns.

Retrieved from "http://wiki.wargaming.net/en/index.php?title=Ship:Venezia&oldid=303572"
Categories:
Your location:
To log in, select the region where your account is registered
CIS Europe North America Asia Republic of Korea
Or use Microsoft Login to enter WoT XBOX ecosystem
Log in