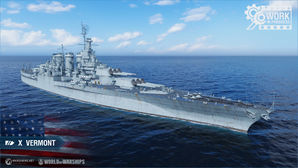 The Vermont appears to be inspired by the famous Tillman "maximum battleship" design studies prepared 1916-17 by Senator Tillman. Vermont closely resembles something that's a cross between Tillman IV-1 and Tillman I. However she carries fewer guns than either design. Tillman IV-1 carried thirteen 18 inch guns and Tillman I carried twelve 16 inch guns. Her armor scheme, however, is exactly the same as the Tillman IV-1;but, dispite the armor and armament that resembles the Tillman designs. Vermont's actually slower by atleast two knots than the other designs, Tillman IV-1 (25.2 knots) Tillman I (26.5 knots).

Ships of U.S.A.
Battleships
Retrieved from "http://wiki.wargaming.net/en/index.php?title=Ship:Vermont&oldid=303599"
Categories:
Your location:
To log in, select the region where your account is registered
CIS Europe North America Asia Republic of Korea
Or use Microsoft Login to enter WoT XBOX ecosystem
Log in