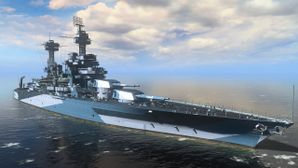 W. Virginia 1941 is quite similar to her tech-tree sister, Colorado. Armed with the same set of eight 16" guns, tough armor, and sluggish maneuverability, captains familiar with Colorado's play style will be right at home using W. Virginia 1941.

W. Virginia 1941 is placed at Tier VI, and as such has a few differences from her sister at Tier VII. She has a difference of 9,100 hit points, and almost 3 kilometers less range. She does however possess a faster rudder shift time. Her anti-aircraft firepower is also significantly worse than that of Colorado, and even worse than that of Arizona.

Like her sister, W. Virginia 1941 excels at mid- and close-range engagements with her enemies. Her large, accurate guns are devastating against cruisers and battleships alike, and her thick armor, when angle properly, keeps her safe from being citadelled by enemy armor piercing ammunition, although guns larger than 356mm will still get overmatch penetration damage on her 25mm plating. She is quite vulnerable to high explosive shells, especially those found on higher tier cruisers and destroyers.

Her slow speed and short range requires captains to have a good grasp of positioning and map layouts to reach engagements in a safe and timely fashion. Captains should be wary of over extending, as her speed will prevent her from withdrawing safely. When top tier, W. Virginia 1941 can easily lead a push; when up-tiered, W. Virginia 1941 is best played as a mid-range support ship.

Captains who have experience playing Colorado — or any of the American battleships from Tier VII and below — should have no problems playing W. Virginia 1941. She offers players something different than Arizona: fewer shells, but more punch.

As a premium ship, W. Virginia 1941 doesn't have any upgrades to research.

The recommended upgrades for W. Virginia 1941 are as follows:

As a premium ship, W. Virginia 1941 comes included with Type 9 camouflage that lowers her detection radius, reduces the accuracy of incoming shells, reduces her repair costs, and increases the amount of experience she earns. 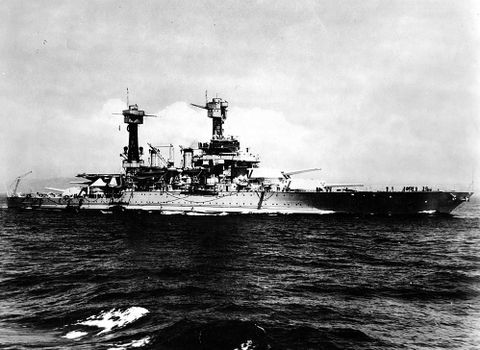 Ships of U.S.A.
Battleships
Retrieved from "http://wiki.wargaming.net/en/index.php?title=Ship:W._Virginia_1941&oldid=293265"
Categories:
Your location:
To log in, select the region where your account is registered
CIS Europe North America Asia Republic of Korea
Or use Microsoft Login to enter WoT XBOX ecosystem
Log in