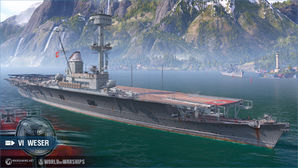 A project created during World War II to convert an Admiral Hipper-class heavy cruiser into an aircraft carrier. Weser inherited the high speed and strong armor protection of her prototype, while also outmatching the power of her AA defenses to a certain degree.

The consumables available for the ship and each plane type for Weser is as follows:

Ships of Germany
Aircraft Carriers
Retrieved from "http://wiki.wargaming.net/en/index.php?title=Ship:Weser&oldid=298997"
Categories:
Your location:
To log in, select the region where your account is registered
CIS Europe North America Asia Republic of Korea
Or use Microsoft Login to enter WoT XBOX ecosystem
Log in