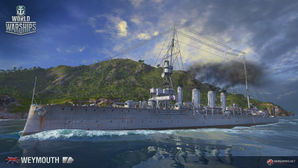 This medium-size cruiser had weak armor protection, but boasted powerful artillery and quite a high speed. She was conceived as a "trade protection" cruiser and was designated for countering lightly-armed enemy ships of the same type.

Weymouth introduces captains to the 152mm rifle, which remains the standard armament of the British cruiser line all the way to Tier X. The ballistics of the shells at this tier is not particularly great, but is satisfactory given the speed and maneuverability of opposing ships captains are likely to encounter at Tiers II and III. The ship itself is nothing spectacular — decent handling and plenty of gun barrels — and while it begins to give captains a taste of what a cruiser line without high explosive looks like, having no other damage options available besides armor-piercing rounds is somewhat frustrating. Thankfully, Weymouth is the last ship in the branch not to have torpedoes available.

The Fire Control System upgrade is less expensive than Hull (B), and is a significant boost to Weymouth’s range. Invest experience there first, then pick up the second hull.

The recommended upgrade for Weymouth is as follows:

With no AA worth mentioning and no high explosive shells available, Tier 1 and Tier 4 skills for Weymouth commanders are something of a conundrum. Basics of Survivability and Survivability Expert are probably the best options available. Most other tiers have a couple of decent options to choose from.

Equal Speed Charlie London can be equipped by captains anxious to quickly grind through the ship. Players brand new to the line might also be interested in mounting Zulu Hotel signals if they are looking to train a commander and carry him through the line with them. Hotel Yankee can be equipped by players looking to run down and ram enemy destroyers to death. India Yankee is helpful when fighting other ships that spew copious quantities of high explosive shells (such as St. Louis or Dresden). 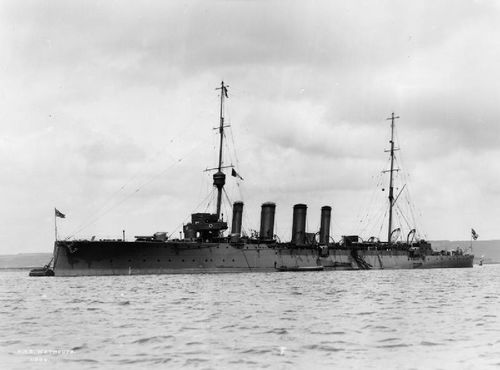 HMS Weymouth was designed and constructed as an improved variant of the Town class cruiser. These ships were intended to fulfill numerous tasks such as escort duty for fleets and convoys. Weymouth retained the same machinery and protective scheme as the original Town class design but traded numerous 102mm guns for additional 152mm guns. She also suffered from the same drawbacks as the older cruisers. The ship, due to her size, had a tendency to roll severely during storms and swells.

Throughout her sevice, Weymouth received directors for her main armament guns and additional small caliber anti-aircraft guns. The ship was eventually fitted an aircraft platform over her conning tower in 1918 but this was removed at the conclusion of World War I.

The Weymouth class – a sub-class of the Town class of light cruisers - consisted of four ships, Weymouth, Dartmouth, Falmouth, and Yarmouth. All were commissioned shortly before World War I and saw service from the North Atlantic to the Mediterranean and Indian Ocean. With the exception of Falmouth, the other three cruisers participated extensively in the hunt for German raiding cruisers, notably Karlsruhe and Emden, and also successfully initiated shipping attacks of their own.

Falmouth spent the majority of her service in the North Atlantic. She participated in the Battle of Jutland, but was torpedoed two months later. After having been successfully towed to safety, she was torpedoed again by yet another submarine the following day and was sunk.

The remaining three members of the Weymouth sub-class continued to participate in Mediterranean operations, notably the Dardanelles and Gallipoli campaigns, and survived the war, though Weymouth and Dartmouth were also torpedoed, but not sunk, by submarines. All three remained in service until they were paid off and sold for scrapping from 1928-1930.

Ships of U.K.
Cruisers
Retrieved from "http://wiki.wargaming.net/en/index.php?title=Ship:Weymouth&oldid=271761"
Categories:
Your location:
To log in, select the region where your account is registered
CIS Europe North America Asia Republic of Korea
Or use Microsoft Login to enter WoT XBOX ecosystem
Log in