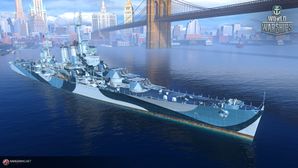 A heavy cruiser that inherited architecture and arrangement from the Brooklyn-class light cruisers. Unlike ships of the previous New Orleans class, Wichita had a new design of the main battery turrets which provided a higher firing accuracy. In addition, she had heavier armor and carried more advanced dual-purpose guns.

Wichita can equip the following consumables:

As a premium ship, Wichita comes included with Type 10 camouflage that lowers her detection radius, reduces the accuracy of incoming shells, reduces her repair costs, and increases the amount of experience she earns.

USS Wichita (CA-45) was a unique heavy cruiser of the United States Navy built in the 1930s. The last American cruiser designed to meet the limits of London Naval Treaty, she was originally intended to be a New Orleans-class heavy cruiser, accordingly with the maximum main armament of three triple 8-inch (203 mm) gun turrets. These were instead placed on an improved hull derived from the Brooklyn-class light cruisers, with increased armoring. This design would go on to form the basis for the later World War II-era heavy cruisers such as the Baltimore-class cruisers. The ship was authorized by the 1929 Cruiser Act, laid down at the Philadelphia Naval Shipyard in October 1935, launched in November 1937, and commissioned into the US Navy in February 1939.

Given how the London Naval Treaty restricted the construction of Heavy Cruiser, the United States were unable to progress further after the New Orleans class. However, just like the Royal Navy and the Imperial Japanese Navy the development on Light Cruisers boomed and the Brooklyn class was the result.

However, this Treaty still allowed the construction of two Heavy Cruisers, one in 1934 and one the year after. For latter it was chosen to adapt the hull of the Brooklyn class and to modify it into a Heavy Cruiser that would differ significantly from preceding designs. The goal was to have a Heavy Cruiser with a better protection and seakeeping, while in addition improving the anti-air-defense and increasing the bunkerage for more fuel. Being a one-of-a-kind ship, no sisterships were considered for Wichita.

Displacing up to 13,000 tons at maximum load, Wichita was noticably larger than the New Orleans class.

The armor protection consisted of a main armor belt with up to 152mm of thickness, which would be reduced to as little as 102mm at the ends. The frontal and rear bulkhead were 152mm strong and a 57mm deck would provide protection against plunging fire and bombs. The barbettes were armored with 178mm strong walls, and the main battery turrets had 203mm strong faces, 95mm thick sides and a 70mm roof plating. The armored conning tower was armored with up to 152mm of armor.

The main guns were placed in three new three-gun turrets, which placed the guns further apart to reduce dispersion and allowed an individual elevation of each gun. Those were the same turrets as the following Baltimore class would carry, however Wichita did not not have the improved hoists installed which would be able to handle the famous SuperHeavyShells. Instead she fired the same Armor Piercing shell as the New Orleans class, at a rate of fire of around four rounds per minute. Just like the preceding classes no Torpedo armament was planned or installed.

The Secondary Armament was significantly improved, and a eight single mounted 127mm/38 guns were installed. Over the older 127mm/25 they featured a better rate of fire and range, and four turrets were also enclosed to protect against weather and splinters. They were spread out over the length of the superstructure, with two mountings being on the centerline. Initial concerns regarding the stability of Wichita led to only six guns being installed at first, with the last two being added in 1939. The designed close range defense consisted of eight .50 cal machine guns on the superstructure. However as this was deemed insufficient, two 28mm quad mountings were added in 1941. In 1943 a major AA refit took place which saw the removal of all .50cal and 28mm guns, and instead four quadruple and two twin 40mm Bofors mounts were installed and 18 single mounted 20mm Oerlikons formed the close range defense. Towards the end of World War Two another two 40mm Bofors twins were installed.

Sporting a similar machinery to the Brooklyn class, Wichita carried eight Boilers which would supply steam for her four turbines, generating up to 100,000 shp. The designed speed was 33kn, and with a bunkerage of 1,984 tons of oil a cruising range of up to 10,000 nautical miles was possible.

What made Wichita stand out even more from the older Heavy Cruisers was the arrangement of the Aviation facilities. Just like on the Brooklyn class they were mounted on the stern of the ship, saving space at the midsection of the ship which could be used for smaller armaments. Two catapults and a crane would be used to launch the planes and to lift the returning planes out of the water, and a hangar below the deck allowed Wichita to carry up to four floatplanes.

Ships of U.S.A.
Cruisers
Retrieved from "http://wiki.wargaming.net/en/index.php?title=Ship:Wichita&oldid=280459"
Categories:
Your location:
To log in, select the region where your account is registered
CIS Europe North America Asia Republic of Korea
Or use Microsoft Login to enter WoT XBOX ecosystem
Log in