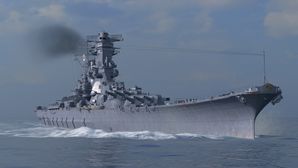 The pinnacle of all Japanese battleship design philosophy and possibly of the entire world, Yamato gains its place as one of the most solid battleships at her tier. She has the fourth-largest hit points of any ship at tier X at a staggering 97200 next to Vermont’s 102800 Großer Kurfürst’s 105800, and Kremlin’s 108300. Her guns have the one of the highest citadel hit damage of any round in the game, at 14800 HP per citadel hit. While her individual AA mounts are mediocre, the sheer number of AA guns, nearly 150 25mm AA barrels (in real life, 162 25mm AA barrels in the latest upgrade), and 24 127mm DP guns provide a mild deterrent, particularly against lower-tier carriers. She, along with her sister ship Musashi holds the record for best torpedo protection in the game, with a value of 56%, which is rather surprising considering that in real life, they both suffered from weak torpedo protection due to design flaws with the area joining the upper and lower armor belts. In the game, Yamato represents the upgraded 1945 variant while Musashi depicts the original version.

With a turning radius of 800m and a top speed of 27 knots, she is also surprisingly maneuverable despite her large size, though still quite short of her real-life maneuverability. However, with a long rudder shift time and extremely slow turret traverse, one must plan all actions, or risk being caught off-guard and unable to react. The guns, while having better accuracy than Conqueror, Montana, and Großer Kurfürst, are very unforgiving, with a 30 second reload stock, which can be decreased to just under 27 seconds at the expense of further reducing its abysmal turret traverse by using a piece of equipment. Being one of the biggest ships in the game, Yamato is constantly targeted by Aircraft Carriers, and despite the numerous AA guns, Yamato’s AA firepower is quite lacking when compared to other T10 battleships, so much so that a high tier carrier can still get planes through, making aerial attacks Yamato's greatest weakness. Hence it is advised to stay near ships that have solid AA suites such as cruisers for an AA "aegis" to be created. In addition, even though your armor is solid, in the game you should still try to angle your ship as sometimes shells may have a chance to hit home and deal glaring damage. Keep in mind that her high citadel can easily be hit if the enemy manages to penetrate your armor, especially since the citadel is weirdly shaped and can be punched through below the a and b turret and and y turret.

Despite all of these drawbacks, Yamato is a very robust battleship in a long-ranged and defensive position. She may not be the fastest, the stealthiest, or the Tier X battleship with the highest RoF, but her armor, gun caliber, and health more than makeup for it. Her guns are so massive, and combined with their immense accuracy, she is a formidable foe. With some good aim and luck, Yamato's glaring damage can wipe battleships off the sea, allowing more vulnerable cruisers, such as Des Moines and Hindenburg, to mop up the remaining enemies. Overall, she is a powerful asset that, with the right build, good teammates, and in the hands of a skilled player, will dominate the battle and can even control it.

As a Tier X ship, Yamato has no additional modules to research and comes elite on purchase.

Satsuma is researched off Yamato at a cost of 1 XP.

The recommended upgrades for Yamato are as follows:

Yamato should be built for survivability, as it lacks AA power to be worth specializing into and is overall dreadful at brawling range due to its size and sluggishness.

Yamato can equip the following consumables:

Yamato comes with 21 signal flag slots. The three most important flags are India Delta, Juliet Yankee Bissotwo and India Yankee; all of which will improve your survivability. If the captain goes with the Secondary Build, the addition of Mike Yankee Soxisix will further improve the performance of Yamato`s secondaries.

The Yamato-class battleships were the next class of warships designed by the Japanese Navy after a long hiatus due to the ratification of a plethora of interwar naval treaties. But by the 1930s, Japan’s increasingly expansionist policies came under scrutiny by the League of Nations. To the world’s shock, Japan decided to withdraw from the League, which also meant she didn’t have to adhere to the aforementioned treaties. The Government understood that her empire would come into conflict with the United States, and devised plans for countering this new, potential threat. Knowing that Japan couldn’t out-produce the US, the IJN opted to make individual ships that were superior to their US counterparts.

Design work on this new class of battleships commenced in 1934, the year Japan pulled out of the League. The ambitious project started out with a selection process of 24 designs. The three most integral components were the ones that were under intense selection: armor, armament, and propulsion. The ideas for propulsion were uncharacteristically creative at a time when turbine power was staple. Many considerations of diesel and hybrid-diesel systems were considered due to the promise of greater endurance. Ultimately, it was narrowed down to conventional turbine propulsion, as previous experimentation with diesel propulsion for a capital ship proved problematic. The system – at such a scale – was highly unreliable, and to replace major components required the removal of many appliqués of armor. As well, the displacement was finally pegged at just under 66,000 tonnes, making this the largest battleship ever constructed, and with such allocation of space, the designers were able to authorize the implementation of 18.1”-caliber guns as opposed to a more traditional choice of 16” guns. By 1937, the designs were finalized, and the construction of five Yamato-class battleships was planned.

The ships were imposing beasts; as ambition fueled much of the design process. From the get-go, the idea was for such a vessel to engage multiple capital ships simultaneously. To do so, it required the armor to maintain sustaining power in a firefight. The belt was no less than 16.1”, and the bulkheads were a tad thinner at 13.7”. The top was capped with a plate about 8” thick, made of improved homogeneous armor. Furthermore, the armored deck was sloped at the outboard edges, thickened to 9", to save on some weight by reducing belt height. But the thickest plates were not on the sides, but found on the faces of the turrets, at an impressive thickness of 26” at most; they were truly impregnable from the front. The novel technique of arc welding was used in the construction process. Its use was justified, as not only was the seams between the armor plates were even tighter, but it also allowed for designers to attach a larger lower armor belt than with previous methods.

The scheme was not perfect though. While the torpedo protection system on paper looked impressive in concept and on paper, poor detailed design of the system meant that in actuality the performance was subpar. The bulges were adequate in their depth, but the riveted seam between the upper and lower belt was directly underneath the bulge, which was shown to be prone to rupture upon impact.

To move such a heavy vessel, the class used 12 Kampon oil-fired boilers, which fed to 4 turbines. This generated an impressive 150,000 shaft horsepower, but it was not enough to break the 30 knot mark; shy by three knots. This was a compromise the designers were willing to take, but went against their venerated belief of speed is key. This drawback prevented the battleships to keep pace with fleet carriers in combined-arms action, as fuel consumption would be unsustainable.

The most characteristic feature of these massive ships was their choice in armaments. Welding nine 18.1” guns in three triple-turrets; two super firing in the front, and one facing the rear. This gave the battleships the ability to hurdle 13 tonnes on ordinance onto a target up to 42 kilometers away at a pace of 1.5 - 2 salvos per minute. The hope was that such firepower would be sufficient to deter aggressors from taking action; a feat of intimidation not hard to believe. Supplementary, the ships initially carried twelve 155mm dual-purpose guns in the form of six twin-gun turrets; three on each flank of the main superstructure. Additionally, the Yamato-class carried a dozen 127mm AA guns in six dual-mounts, and twenty-four 25mm AA guns in eight triple-mounts for defense. By 1944 it was understood that the anti-aircraft firepower of these ships were severely handicapped, and the class underwent modifications. Two of the secondary turrets were removed, and in their place, another 12, 127mm guns were added and a whopping 138, 25mm guns were added.

Yamato, named after the Yamato Province, was the lead-ship of her class. Built by the Kure Naval Arsenal, she was laid down on 4 November 1937. She was launched 8 August 1940 and commissioned 16 December 1941.

Throughout 1942, she served as the flagship of the Japanese Combined Fleet, and in June 1942 Admiral Isoroku Yamamoto directed the fleet from her bridge during the Battle of Midway, a disastrous defeat for Japan. Musashi took over as the Combined Fleet flagship in early 1943, and Yamato spent the rest of the year, and much of 1944, moving between the major Japanese naval bases of Truk and Kure in response to American threats. Although present at the Battle of the Philippine Sea in June 1944, she played no part in the battle.

Ships of Japan
Battleships
Retrieved from "http://wiki.wargaming.net/en/index.php?title=Ship:Yamato&oldid=321403"
Categories:
Your location:
To log in, select the region where your account is registered
CIS Europe North America Asia
Or use Microsoft Login to enter WoT XBOX ecosystem
Log in