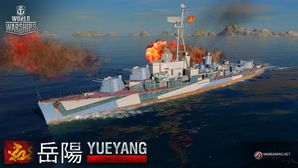 Former U.S. destroyer of the Allen M. Sumner class (USS Haynsworth, DD-700) that was transferred to an east Asian nation in 1970. She was developed from the very successful Fletcher class. In contrast to her predecessor, she had more powerful artillery, but ran at a lower speed.

Yueyang is quite similar to the tier ten USN destroyer, Gearing both appearance and play-style wise. However, there are some significant differences between the two; as Yueyang features deep water torpedoes and a choice between the unique Pan-Asian Smoke Generator (

Sharing in the Gearing's three 127mm twin mounts, Yueyang has rather formidable firepower mounted on her deck. She can overwhelm other destroyers with a constant hail of HE shells, peck away at a battleship's health from the unique Smoke Generator (

) consumable shared by all Pan Asian destroyers in the tech tree, or dissuade enemies from drawing near with the sheer intimidation factor afforded by being constantly hit by a new salvo every three seconds. The 127mm mount on Yueyang has slightly more range than the Gearing's, though not so much as to make a massive difference between the two. In all other respects though, they have the exact same firepower.

For a destroyer, stealth is everything, and Yueyang does not dissapoint in this department. She has the lowest surface detectability among all tier ten destroyers, edging out the nearest competitors by a slight margin. Unfortunately, as tier ten destroyers tend to have worse detection when compared to their tier nine counterparts, this isn't a very big consolation. Yueyang also has the second lowest hit pool out of her counterparts, though this isn't as harmful as one would think. Yueyang sits much, much lower in the water than the Gearing does, making her harder to hit and allowing her to avoid damage other destroyers might have taken. She is also slightly more maneuverable than the Gearing; especially considering that Pan-Asian destroyers have no option to take the Defensive AA Fire (

) consumable, pigeonholing them into using the Engine Boost (

The biggest difference between Yueyang and the destroyers of other nations are her deep water torpedoes. With some differences, they are the same torpedoes found on Gearing. They have 3km less range, but go 2 knots faster. They both do the same amount of damage, and have the same reloads. However, deep water torpedoes are less detectable at the price of not being able to hit any other destroyers; allies and enemies alike. They are very much specialised at dealing with larger ships, and fulfil this duty admirably. Due to their low detectability, there is almost no time for enemy ships to react to or dodge the torpedoes.

As a tier ten ship, Yueyang has no additional modules to research.

Similar to many USN destroyers, the Yueyang can be built to favor guns or torpedoes. However, given that her largest distinguishing feature is the deep water torpedoes, it's advisable to built towards those.

Generally, building up torpedo performance is something greatly encouraged with Pan-Asian destroyers. However, also try to put points towards the ship's survivability. That way, it is easier to live longer and build up more damage on the enemy team.

Players who wish to spend doubloons can equip Yueyang with Type 20 camouflage that lowers her detection radius, reduces the accuracy of incoming shells, reduces her repair costs, and increases the amount of experience she earns.

Ships of Pan-Asia
Destroyers
Retrieved from "http://wiki.wargaming.net/en/index.php?title=Ship:Yueyang&oldid=267992"
Categories:
Your location:
To log in, select the region where your account is registered
CIS Europe North America Asia Republic of Korea
Or use Microsoft Login to enter WoT XBOX ecosystem
Log in