USA | Medium Tank | Tier VIII
Battle Tier
1234567891011
Overview
Mouse over "
▲
Well, the ones further down, of course.
" for more information
[Client Values; Actual values in
▲
Specifically, the mismatch in crew values caused by commander's 10% crew skill bonus. Outside of a crew of 1 commander only, 100% crew is a fiction. The client values, given for 100% crew, will normally be taken into battle with 110% crew skill members aside from specific functions, causing their actual performance to deviate from the expected client value. These differences are taken into account in tooltip boxes.
]
Crew
Mobility
Armor
Armament
General
Values are Stock - click for TopValues are Top - click for Stock
T20
M26 Pershing
M46 Patton

The M26 Pershing is an American tier 8 medium tank.

American medium tank, named in honor of General John Pershing, who led the American Expeditionary Force during World War I. In 1944–1946 in the U.S. Army, the M26 was temporarily classified as heavy tank. Starting in February 1945 these vehicles took part in World War II; in 1950–1951 the vehicle saw combat in the Korean War.

Compared to other tier 8 medium tanks, Pershing armor is excellent and capable of bouncing low-tier guns. However,like all other medium tanks, it does not fare well on its own and will easily get destroyed if caught in the open by tank destroyers or heavy tanks. Therefore, it acts better as a mobile mid-range sniper or as support for heavier tanks. After you get the upgraded engine, the Pershing becomes much faster and can plug holes in whichever areas are needed. Its top gun is effective in the supporting role, but will find itself outclassed when fighting most heavies from the front.

The M26 Pershing leads to the M46 Patton.

A very solid tier 8 tank, the Pershing can excel as a support, flanker, sniper and is hard to dislodge in a hull down position. It can even lead a push if there are no heavies to do the job since its turret and hull can bounce some lower tier guns if angled properly. A 100% trained crew with Sixth Sense on the commander, gun rammer and vertical stabilizer is VITAL on this tank for good performance. Just remember to use your brain when playing this tank, use superior mobility to outflank heavy tanks and TDs, use your turret armor to face hug other mediums and keep your front towards the enemy mediums in a dogfight and you will find huge success with this tank. 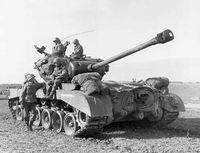 USA
Medium Tanks
ja:Tank:A35 Pershing
Retrieved from "http://wiki.wargaming.net/en/index.php?title=Tank:A35_Pershing&oldid=68860"
Categories:
Hidden category:
Your location:
To log in, select the region where your account is registered
CIS Europe North America Asia Republic of Korea
Or use Microsoft Login to enter WoT XBOX ecosystem
Log in