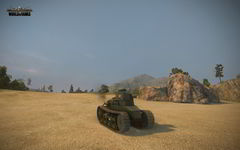 China | Light Tank | Tier I
Battle Tier
1234567891011
Overview
Mouse over "
▲
Well, the ones further down, of course.
" for more information
[Client Values; Actual values in
▲
Specifically, the mismatch in crew values caused by commander's 10% crew skill bonus. Outside of a crew of 1 commander only, 100% crew is a fiction. The client values, given for 100% crew, will normally be taken into battle with 110% crew skill members aside from specific functions, causing their actual performance to deviate from the expected client value. These differences are taken into account in tooltip boxes.
]
Crew
Mobility
Armor
Armament
General
Values are Stock - click for TopValues are Top - click for Stock
Renault NC-31
Vickers Mk. E Type BT-26G FT

The Renault NC-31 is a Chinese tier 1 light tank.

A Renault FT modification with a new chassis that used long-stroke suspension elements and Kégresse-Hinstin fanged rubber tracks with metal shoes. These features, along with an upgraded 45 h.p. engine, increased the top speed to 16 km/h. A total of 15 vehicles of this type were exported to China.

The Renault NC-31 is a Tier 1 Chinese light tank. It is a modified French RenaultFT But its actually faster than its original counterpart, able to equip a better engine and equipped with excellent weapons for its tier, such as an automatic 13mm cannon or a 3.7mm gun, capable of hurting every tank that it sees with the tradeoff of having a slightly longer aim time and not so great accuracy. a great Starter tank for new players on the Chinese tree

It is recommended to use free experience to get at least the top engine because even with the top engine, this tank has a rather slow top speed. The first thing you research should be the second gun, because its excellent ROF will help you quickly destroy other tier 1s. After that, it's your choice whether to research the 37mm gun, the upgraded engines, the top radio, the suspension, or to go straight to the Vickers Mk. E Type B.