Germany | Light Tank | Tier II
Battle Tier
1234567891011
Overview
Mouse over "
▲
Well, the ones further down, of course.
" for more information
[Client Values; Actual values in
▲
Specifically, the mismatch in crew values caused by commander's 10% crew skill bonus. Outside of a crew of 1 commander only, 100% crew is a fiction. The client values, given for 100% crew, will normally be taken into battle with 110% crew skill members aside from specific functions, causing their actual performance to deviate from the expected client value. These differences are taken into account in tooltip boxes.
]
Crew
Mobility
Armor
Armament
General
Values are Stock - click for TopValues are Top - click for Stock
Pz.Kpfw. 38H 735 (f)

In the course of the French Campaign, Germany captured about 600 Hotchkiss 39 vehicles. They were modified and continued to serve in Wehrmacht units.

Since it is a captured French tank, its play style differs from the other low-tier German tanks. Even so, it is often compared to the Maus because of its low-damage gun, low mobility, and high armor. One may use it as a line breakthrough tank or a durable sniper. Two hits (possibly even one) directed towards the commander's cupola or turret ring may disable this tank for the remainder of the battle.

This tank was removed from the in-game store in February 2012, following the introduction of the French Tech Tree. Since then, it has been available in the gift shop twice (August 2012 and May 2013).

The "Minimaus" or "Hotchy" was once the most feared tank in Battle Tier 2. There was a time when the only thing to stop one was another Minimaus. In recent times, with the addition of the Tetrarch and more recently the French TD line, there are guns that now easily penetrate its armor. If you find yourself facing them regularly, it is a good thing to learn which guns on which tanks are capable of penetrating its armor. The BT-2, T-26, Tetrarch and even the lowly MS-1 all possess guns capable of regularly doing damage to this tank. Prior to the arrival of the tier 2 tank destroyers, the Minimaus was able to achieve Top Gun regularly. With this new challenge, players will need to learn to play this tank a lot wiser and use its view range to maximum benefit.

Unfortunately, the role of this tank is almost completely outclassed by the T18 at its own tier. As such, it is at a bit of a handicap when fighting tanks these days. The T18 can penetrate and deal damage to this tank with either of it's top guns, and the 75mm can potentially one shot the Pz38H if running HEAT rounds.

The Hotchkiss H35, or Char léger modèle 1935 H, was a French light tank developed prior to World War II. Despite having been designed from 1933 as a rather slow, but well-armored, light infantry support tank, the type was initially rejected by the French Infantry because it proved difficult to steer while driving cross-country, and was instead adopted in 1936 by the French Cavalry. In 1938, an improved version was produced with a stronger engine, the Char léger modèle 1935 H modifié 39, that from 1940 was also fitted with a longer, more powerful 37 mm gun. It was intended to make this improved variant the standard light tank, and was to be produced in a number of at least four thousand in order to equip new armored divisions of both the Cavalry and the Infantry. However, due to the defeat of France in June 1940, total production of both subtypes remained limited to about 1200 vehicles. For the remainder of the war, Germany and its allies would use captured Hotchkiss tanks in several modifications. 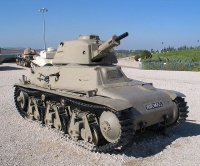 Hotchkiss H-39 light tank in Yad la-Shiryon Museum, Israel. 2005. The Char léger modèle 1935 H modifié 39; this vehicle has been modified by the Germans who fitted a cupola hatch.

As the Cavalry wanted an even better top speed, it was decided to bring to fruition experiments already conducted from October 1936 to install a stronger engine. A new prototype was made in 1937, with a 120 hp instead of a 78 hp engine. The hull was enlarged to accommodate it, and the track and the suspension elements were improved, raising the weight to 12.1 tons. This improved variant was faster, with a top speed of 36.5 km/h (22.6 mph), and much easier to drive. Therefore, it was first presented to the Commission d'Expérimentations de l'Infanterie on 31 January, 1939, to see whether the original negative decision could be changed. The commission indeed accepted the type, the Char léger modèle 1935 H modifié 39.

It was decided on 18 February to let it succeed the original version from the four hundred first vehicle onwards, which was just as well, as both in 1937 and 1938 an order had been made for 200 vehicles and production had already started. The total orders of the improved type was thereafter expanded to 900. The factory identifier, however, was the Char léger Hotchkiss modèle 38 série D, its predecessor having been the série B. The designation has caused much confusion; this was still officially the same tank as the "H 35", only in a later variant. However, even at the time, many began to refer to it as the 38 H or the 39 H.

The new subtype differed from the original one in having a raised and more angular engine deck (In later production, vehicles had crosswise instead of longitudinal ventilation slits on the right side.), road-range decreased to 120 km, closed idler wheels, tracks two centimetres wider at 27 cm, metal instead of rubber wheel treads, a silencer directed to the back, and larger, more reliable and effective ventilators.

Hotchkiss H39 on display at the Musée des Blindés in [Saumur].

In early 1940, a modernisation program was initiated. Aside from the fitting of episcopes, tails, and some radio sets, this included the gradual introduction of a longer L/35 37 mm SA38 gun that had a much improved anti-tank capacity (30 mm penetration at 1000 m). About 350 vehicles were (re)built with the better gun, among them about fifty "H 35"s.[1] The new gun became standard in the production lines in April. Before that change, the available new guns had, from January 1940, gradually been fitted to the tanks of platoon, company, and battalion commanders; about half of the commander vehicles in Hotchkiss units were so modified. It had been intended to fit the longer gun to all vehicles during the second half of 1940.

After the war, it was for a time erroneously assumed that "H 38" was the official name of the tank with the new engine, but without the new gun: "H 39" was the name of the type that had both major improvements. These mistakes are still common in many secondary literature. The "H 38" was, in fact, identical to the "H 39", and it is only correct to refer to the latter in an informal sense. Parallel to the development of an R 40, consideration was given, for a time, to the creation of an "H 40" by adopting the improved AMX suspension of the other vehicle. In the end, this option was rejected.

In April 1940, the 342e CACC was sent to Norway after the German invasion of that country, having first been intended to form part of an expeditionary force to assist Finland in the Winter War. This autonomous company, equipped with fifteen "H 39"s, all with short guns, fought at Narvik, after having landed on 7 May. After the temporary liberation of that city, the twelve remaining vehicles were withdrawn to Britain on 8 June, where they joined the Free French, forming the 1e Compagnie de Chars de Combat de la France Libre. In 1940 and 1941, this 1e CCC fought against Vichy-troops in Gabon, and later in Syria.

About 550 tanks were captured and used by the Germans as the Panzerkampfwagen 35H 734(f) or Panzerkampfwagen 38H 735(f). Most were used for occupation duty, but the independent 211e Panzerabteilung was deployed in Finland during Operation Barbarossa. Additional vehicles were sent to Finland as part of the independent Panzerkampfwagenzüge (tank platoons) 217, 218, and 219, which were attached to the 20th Mountain Army in February 1942[3]. The platoons were the same as those of Panzerabteilung 211, consisting of one SOMUA S35 and four Hotchkiss tanks.

Like the French themselves, the Germans made no clear distinction between a "H 38" and a "H 39". The Germans fitted hatches to tanks equipped with a cupola. Some vehicles were modified to become munition carriers, artillery tractors (Artillerieschlepper 38H(f))s, or rocket-launchers (Panzerkampfwagen 35H(f) mit 28/32 cm Wurfrahmens). In 1942, 24 were converted into Marder I Panzerjägers or tank destroyers (using the 7.5 cm PaK40(Sf) auf Geschützwagen 39H(f)), and 48 into mechanised artillery, the 10.5 cm leFH18(Sf) auf Geschützwagen 39H(f). All were to be used by units in France. A special artillery observation vehicle was created, the Panzerbeobachtungswagen 38H (f). In June 1943, 361 Hotchkiss tanks were still listed in the German Army inventories as 37 mm gun tanks. This number had decreased to sixty in December 1944.

In 1943, the Germans, against objections, delivered nineteen "H 39"s to Bulgaria for training purposes when it proved to be impossible to find 25 unmodified Panzerkampfwagen Is, the type the Bulgarians really desired. After the war, these vehicles were used by police units. In 1944, the Germans delivered fifteen vehicles to Hungary and a small number to Croatia.

In North Africa, 27 vehicles (thirteen H 35s and fourteen "H 39"s) were officially serving in the 1e Régiment de Chasseurs d'Afrique and were allowed to remain there by the armistice conditions, and another five were hidden in Morocco. They fought the Allies during the opening stages of Operation Torch near Casablanca in November 1942, destroying four M3 Stuart light tanks. The regiment then joined the Allied cause and was re-equipped with M4 Shermans in the summer of 1943.

After the war, some Hotchkiss tanks were used by French security forces in the colonies and occupation forces in Germany. Ten "H 39s" were clandestinely sold to Israel and shipped from Marseilles to Haifa in 1948. At least one remained in service with the IDF until 1952.

One Hotchkiss H35 and nine Hotchkiss H35s modifié 39 have survived until today. All of the modifié 39s were modified again by the Germans during WW2 [4]. The sole surviving unmodified Hotchkiss H35 was discovered in December 2008, 200 meters off the coast, at Sainte-Cecile beach, Camiers, Pas-de-Calais, France. It is a turretless chassis, most probably a veteran of the Dunkerque gap fightings, which happened in May–June 1940. The tank was dredged in late 2008 thanks to the tide [5]. The Musée des Blindés at Saumur plans to recover this tank in order to display it in the museum, but its recovery proves to be very difficult and costly.

One Hotchkiss H35 modifié 39 tank is on display in the city square in Narvik as a memorial of the Battle of Narvik in 1940. A second vehicle, in Norway, is part of the collection of the Pansarparken at Rena Leir. In England, the private Kevin Wheatcroft Collection has bought an example from the Norwegian Arquebus Krigshistoriske Museum at Rogaland. In France itself ,the Musée des Blindés at Saumur has a vehicle in running condition. At the base of 501/503e RCC at Mourmelon-le-Grand, a Hotchkiss restored with a Renault R35 turret and fitted with a dummy gun serves as a monument. Another tank is displayed at Uzice, in Serbia. The Bulgarian National Museum of Military History displays one of the vehicles used by the Bulgarian police forces. At Latrun, in Israël, the Yad la-Shiryon Museum shows one of the tanks used by the IDF. In Russia, the tank museum of Kubinka has a Hotchkiss tank in running condition, captured from the 211th Panzerabteilung in the summer of 1944.
click to read more...