The tier 4 PzKpfw III is one of the best scouts in the German tech tree, and challenges the Leopard. The PzIII has slightly more maneuverality than the Leopard, potentially more firepower, thicker (but unsloped) armor, and more matches against lower tier tanks. The PzKpfw III has two possible main guns to choose from, the howitzer-like 7.5cm and a higher penetration 5cm gun, each oriented towards differents battlefield.

The 7.5cm howitzer is able to damage higher tier tanks, but is not as effective against lower tier tanks as the 5cm gun. The main reasons for this are that the 7.5cm gun works best firing HE shells (thus giving it the ability to damage every tank) at a lower rate of fire and the 5cm gun best deals damage through AP shells at a higher rate. The 7.5cm deals more damage per shell, however the 5cm does more total damage per minute due to rate of fire.

Following specifications laid down by Heinz Guderian in 1934, the Army Weapons Department drew up plans for a medium tank with a maximum weight of 24,000 kg and a top speed of 35 kilometers per hour (21.75 mph). It was intended to be the main tank of the German Panzer divisions, capable of engaging and destroying opposing tank forces. Daimler-Benz, Krupp, MAN, and Rheinmetall all produced prototypes. Testing of the prototypes took place in 1936 and 1937, leading to the Daimler-Benz design being chosen for production. The first model of the Panzer III, the Ausf. A, came off the assembly line in May 1937, while mass production of the Ausf. F version began in 1939. Much of the early development work on the Panzer III was a quest for a suitable suspension. Several varieties of leaf-spring suspensions were tried on Ausf. A through Ausf. D before the torsion-bar suspension of the Ausf. E was standardized. The Panzer III, along with the Soviet KV heavy tank, was one of the first tanks to use this suspension design.

A distinct feature of the Panzer III was its three-man turret. This meant the commander was not distracted with neither the loader's or gunner's tasks and could fully concentrate on maintaining situational awareness. Other tanks of the time did not have this capability, providing the Panzer III with a potential combat advantage.

PzKpfw III Panzerbefehlswagen (command tank) III ausf E or F somewhere in Greece 1940. Fitted with a 37 mm gun and two coaxial machine guns
For example, the French Somua S-35 had a one-man turret crew, while the original Soviet T-34 featured a two-men turret. Also, the Panzer III, as opposed to the Panzer IV, had no turret basket, merely a foot rest platform for the gunner.

The Panzer III was intended as the primary battle tank of the German forces. However, when it initially met KV and T-34 tanks, it proved to be inferior in both armor and gun power. To meet the growing need to counter these tanks, the Panzer III was up-gunned with a longer and more powerful 50-millimeter cannon and received more armor, although this failed to effectively address the problem caused by the KV tank-designs. As a result, production of self-propelled guns, as well as the up-gunning of the Panzer IV, was initiated.

In 1942, the final version of the Panzer III, the Ausf. N, was created with a 75-millimeter KwK 37 L/24 cannon: a low-velocity gun designed for anti-infantry and close-support work. For defensive purposes, the Ausf. N was equipped with HEAT ammunition which could penetrate 70 to 100 millimeters of armor, but these were strictly used for self-defense as this variant of the tank was not intended for an anti-tank role.

Starting with the Ausführung E., from December 1938 through February 1943, a total of 4,958 tanks and 321 commander's vehicles were produced.

The Panzer III Ausf. A through C had 15 millimeters of homogeneous steel armor on all sides with 10 millimeters on the top and 5 millimeters on the bottom. This was quickly determined to be insufficient, and was upgraded to 30 millimeters on the front, sides, and rear in the Ausf. D, E, F, and G models, with the H model having a second 30-millimeter layer of face-hardened steel applied to the front and rear hull. The Ausf. J model had a solid 50-millimeter (1.97 in) plate on the front and rear, while the Ausf. J¹, L, and M models had an additional layer of 20 millimeters (0.79 in) of armor on the front hull and turret. This additional frontal armor gave the Panzer III frontal protection from most British and Soviet anti-tank guns at all but close ranges. The sides were still vulnerable to many enemy weapons, including anti-tank rifles at close ranges. The Panzer III Ausf. A through C were powered by a 250 horsepower (183.87 kW) 12-cylinder Maybach HL 108 TR engine, giving a top speed of 32 kilometers per hour (19.88 mph), and a range of 150 kilometers (93.21 mi). All later models were powered by the 300 horsepower (220.65 kW) 12-cylinder Maybach HL 120 TRM engine. Top speed varied, depending on the transmission and weight, but was around 40 kilometers per-hour. The range was generally around 155 kilometers.

The Panzer III was intended to fight other tanks: in the initial design stage, a 50-millimeter cannon was specified. However, the infantry at the time were being equipped with the 37-millimeter PaK 36, and it was thought that in the interest of standardization, the tanks should carry the same armament. As a compromise, the turret ring was made large enough to accommodate a 50-millimeter cannon, should a future upgrade be required. This single decision would later assure the Panzer III a prolonged life in the German army. The Ausf. A to early Ausf. F were equipped with a 3.7 cm KwK 36 L/46.5, which proved adequate during the campaigns of 1939 and 1940. The later Ausf. F to Ausf. J were upgraded with the 5 cm KwK 38 L/42, and the Ausf. J to M with the longer 5 cm KwK 39 L/60 cannon in response to increasingly better armed and armored opponents. By 1942, the Panzer IV was becoming Germany's main medium tank because of its better upgrade potential. The Panzer III remained in production as a close support vehicle. The Ausf. N model mounted a low-velocity 7.5 cm KwK 37 L/24 cannon: the same used by the early Panzer IV Ausf. A to Ausf. F models. These guns had originally been fitted to older Panzer IV Ausf A to F1 models, and had been placed into storage when those tanks had also been up-armed to longer versions of the 75mm gun. All early models up to and including the Ausf. F had two 7.92 mm MG 34 machine guns mounted coaxially with the main gun, and a similar weapon in a hull mount. Models from the Ausf. G and later had a single coaxial MG34 and the hull MG34. 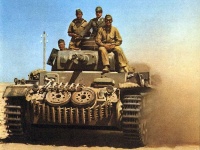 The Panzer III was extensively used in the campaigns against Poland, France, the Soviet Union, and in North Africa, while a handful were still in use in Normandy and at Arnhem in 1944.

In the Polish and French campaigns, the Panzer III formed a small part of the German armored forces. Only a few hundred Ausf. A through Fs were available in these campaigns: most armed with the 37-millimeter gun. They were the best medium tanks available to the Germans and outclassed most of their opponents such as the Polish 7TP and French R-35 and H-35 light tanks.

Prior to the invasion of the Soviet Union, the Panzer III was numerically the most important German tank. At this time, the majority of the available tanks had the 50 millimeter KwK 38 L/42 cannon, which also equipped the majority of the tanks in North Africa. Initially, the Panzer IIIs were outclassed and outnumbered by Soviet T-34 and KV tanks. However, the most numerous Soviet tanks were the T-26 and BT tanks. This, along with superior German tactical skill, crew training, and the good ergonomics of the Panzer III, all contributed to a rough 6:1 favorable kill-ratio for German tanks of all types in 1941. With the appearance of T-34 and KV tanks, re-arming the Panzer III with a longer, more powerful 50-millimeter cannon was prioritized. The T-34 was generally invulnerable in frontal engagements with the Panzer III until the 50 mm KwK 39 L/60 gun was introduced on the Panzer III Ausf. J¹ in the spring of 1942.

This could penetrate the T-34 frontally at ranges under 500 metres. Against the KV, it was a threat if armed with special high-velocity tungsten rounds. In addition, to counter anti-tank rifles, in 1943 the Ausf. L version began the use of spaced armour skirts around the turret and on the hull sides. However, due to the introduction of the up-gunned and up-armoured Panzer IV, the Panzer III was, after the Battle of Kursk, relegated to secondary roles and replaced as the main German medium tank by the Panzer IV and the Panther.

The Panzer III chassis was the basis for the turretless Sturmgeschütz III (StuG III) assault gun, one of the most successful self-propelled guns of the war, and the single most-produced German armored fighting vehicle design of World War II.

By the end of the war, the Pz.III had almost no frontline use and many had been returned to the factories for conversion into StuG assault guns: in high demand due to the defensive warfare style adopted by the German Army by then.
click to read more... 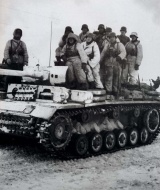 German Tanks
Medium Tanks
Retrieved from "http://wiki.wargaming.net/en/index.php?title=Tank:PzIII_AusfJ&oldid=9932"
Categories:
Your location:
To log in, select the region where your account is registered
CIS Europe North America Asia Republic of Korea
Or use Microsoft Login to enter WoT XBOX ecosystem
Log in