Homepage/
World of Tanks/
IS

The Russian tier 7 IS tank is the first Iosef Stalin tank available to the player. The IS represents both the IS-1 and the IS-2 model. The IS can be researched from either the KV-3 or the KV-1S heavy tank. The stock tank is the IS-1 model, equipped with the 85mm gun also available on the KV-1S. The IS is a continuation of the KV-1S and will thus feel much lighter and nimbler than the heavy and slow KV-3 model. The IS model can be upgraded to the IS-2, equipped with a 122mm gun, which will feel much more potent when engaging other heavy tanks. It relies on high damage, but has relatively low penetration and reload times. Ultimately, the IS model can unlock the IS-3 heavy tank, the historical successor to the IS-2 tank.

In the beginning of Operation Barbarossa, the KV was the Soviet's heavy tank. German tanks of the time had difficulties engaging it, but after the Tiger appeared, the heavy KV proved inadequate. The tank was heavy, but poorly armed with the same gun as the much more mobile T-34 medium tank. Thus, a replacement was ordered. N.V. Tseits, recently released from a GULag, was appointed head designer of the new project.

The project first led to a KV-13 (the ingame KV-3) universal tank, which was supposed to have medium weight and heavy protection, with both turret and hull protected by casted armor. By sacrificing internal space, consumption of materials were minimized for a given armor protection, following instructions of the State Defense Committee's decree of 1942. The KV-13 was equipped with a 600hp engine, capable of reaching speeds up to 55 km/h, and used parts from both the T-34 and the KV. However, acceleration was poor and the tank suffered severe reliability problems. Despite improvements, the Russian military lost interest in the project.

Despite this, the Experimental Tank Factory continued research and testing, led by N.F. Shamshuring after the death of Tseits. The design was now more based on the KV-1S. After the appearance of the German heavy Tiger tanks, the speed of development was increased and orders were placed for two Iosef Stalin (IS) prototypes, based on the design of the KV-13. One of the prototypes, the IS-1 (factory designation: Object No.233), was armed with a 76.2mm gun, the other, the IS-2 (factory designation: Object No.234) was armed with the 122mm U-11 howitzer. Both tanks had better armor protection, a higher speed and equal or better armament than the KV-1S. Problems with the engine and transmission were solved while factories prepared for the production of the new vehicles.

After the first data about the German Tiger tank became available, it turned out that the 85mm AA-gun 52-K model 1939 was the most effective against it's armor. It could penetrate the 100mm frontal armor from 1000m. New 85mm guns based on the 52-K model were developed, the D-5T gun ultimately being the chosen gun for further development. The IS-1 was ordered into production, together with an order for the development of an IS with a 122mm gun, based on the 122mm Field Cannon A-19 Model 1931, which proved to be the most effective anti-tank gun in the battle of Kursk. During tests, the 122mm was able to throw a Panther several meters back with a penetrating shot in it's side armor. Other tests were done with a 100mm gun, but this gun was not available in large numbers and ultimately scrapped.

In combat, the 122mm with regular sharp-nosed APHE ammunition, did not prove to be very effective against Tigers (penetration from 1200 meters) and the sloped Panthers (penetration from 600-700 meters). Soviet designers noticed that the blunt-nosed HE ammunition was much more effective against sloped armor. It caused cracking of the armor and could tear off the whole front armor plate at the seam weld. However, in 1944 the problems of the APHE round also disappeared as the German tanks decreased in armor quality due to lack of materials and the Soviet ammunition improved in quality. The IS-2 also improved in quality: from 1944 onwards, the front armor was tempered to a very high hardness, leading to better protection, but higher production costs.

Despite this, the armor protection of the IS-2 was still lower than expected: a Russian 76.2 mm Gun ZiS-3 could penetrate it from all sides at a distance of 600-700 meters. Not all shots penetrated, but the impacts also caused armor splintering and fragmentation inside the turret. As a result, many many ISs were lost during the winter and spring of 1944. Further modifications meant the German 88mm guns could not penetrate it's front armor at point-blank range from an angle of 30 degrees. The turret could not be further modified. The 122mm already caused major imbalances (as the turret was designed for the 85mm gun) and increased armor would result in even more problems. Some smaller improvements to the turret led to an AA-gun and an improved periscope.

Russian tank doctrine focussed on only two tanks, the medium T-34 tank and successors, and the heavy IS-2 tank. In total 3,483 IS-2s and 107 IS-1s were produced. Afterwards, production shifted to it's successors, the IS-3 and IS-4.

The IS-2 tank was designed as a breakthrough tank and proved very effective during the course of the war. The separate breakthrough regiments, previously equipped with KV tanks, could field the new tanks from February 1944 onwards, receiving the "Guards" status in the process. Each regiment of 375 men in total consisted of 21 tanks (4 companies of 5 tanks and a commander tank), a SMG infantry company (riding on the tank), an anti-aircraft battery, a sapper platoon, a medical platoon, and a signal platoon.

The tank crew was, due to formations of new regiments, partly inexperienced. Each tank had four crew members: two lieutenants (the tank commander and the driver) and two sergeants (the loader and the gunner). The big disadvantage of this setup was that the tank commander had a secondary task: operating the radio. This meant that he could not fully concentrate on the battlefield. 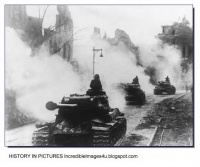 The new tanks first saw action on February 15, 1944, during the Korsun-Shevcheskovsk Operation. 5 IS-1 tanks were ordered to help the 109th tank brigade in the assault on Lisyanka village in Ukraine. When the Soviet tanks approached within 600-700 meters, the Germans opened fire and knocked out all Soviet tanks. However, the village was captured the next day.

The first IS versus Tiger battle occurred on the first of March 1944. 1 IS-1 was destroyed and two were crippled after the German Tigers opened fire at a distance of 1500 to 1800 meters. Two Tiger tanks were damaged. More IS-1s were damaged by artillery and field guns and as a result, the Soviet military demanded higher armor quality and the cancellation of the 85mm gun.

The IS-2 was more successful. The 72nd regiment took part in fighting near Obertin between April 20 and May 10 and destroyed 41 Tiger I and Ferdinand tanks (it should be noted, however, that all German tank destroyers were labeled Ferdinand by the Russians, most likely the Ferdinands were Stug IIIs in reality). Only 8 IS-2s were lost in the battle.

The Tiger II and the IS-2 only met on a few occasions. Generally this encounters resulted in high losses on both sides. The first and most successful battle happened between a single IS-2 and 7 King Tigers. The IS-2 ambushed the Tiger IIs and destroyed three of them. The other four retreated.

However, the main task of the IS-2 was not tank versus tank combat. The tank was especially potent against soft targets with it's 25 kg HE shells. The appearance of the IS-2 meant the Russians were now able to break through enemy lines defended by bunkers and AT-guns. At the very end of the war, the IS-2 was successful as a breakthrough tank in the Battle of Berlin, as it was able to destroy buildings with a single shot. At that point in the war, the main enemy of the IS-2 was not the Panther or King Tiger, but infantry with Panzerschrecks or Panzerfausts. 70% of the IS-2s destroyed in that battle were destroyed with these kind of weapons.

IS-2 after the war

In May 1945, production of the IS-2 stopped in favor of the new IS-3. However, the IS-2 was used until the 1970s by the Russian, Chinese, and North Korean army. The last time the IS-2 was used was during training in 1982, but the vehicle was only definitely scrapped in the 1990s.

During the later stages of the war, the IS series was a primary Russian tank, mainly used to break through enemy lines. It was the first Russian tank that was able to face a Tiger or King Tiger one on one. In that role, it did not only have tactical value, but also acted as the model for the turn of the war. Russian morale received a boost after the employment of these tanks.

The IS-2 was on paper a heavy tank, but it was more mobile and agile than it's predecessor, the KV. Internal space was sacrificed for performance and cost saving.

The IS-2 was the main tank in the final battle on the Russian front, the Battle of Berlin. It proved to be an excellent fighter in the streets of the German capital.

Soviet Tanks
Heavy Tanks
Retrieved from "http://wiki.wargaming.net/en/index.php?title=Tank:R01_IS&oldid=6012"
Categories:
Your location:
To log in, select the region where your account is registered
CIS Europe North America Asia Republic of Korea
Or use Microsoft Login to enter WoT XBOX ecosystem
Log in