The S-51 is a Soviet tier 6 self propelled gun. Out of the box, it's the same as the SU-14 in the gun department. It's rather slow when you first get it, and performance will be sluggish, but once upgraded, its mobility kicks in. Most players agree that the S-51 is superior to the SU-14 for these reasons; its mobility (especially when relocating to avoid becoming a counter-battery target), its agility in running from danger, and faster traverse speeds in switching between targets. It also has a smaller profile than the SU-14, which helps it with camouflage.

S-51 starts with 152mm BR-2 Howitzer which is similar to the 155mm cannon M12 starts with. Many players agree that the gun is insufficient in both accuracy and damage. However the second gun, 203mm B-4 is the cannon that your enemies will fear you for. It gives S-51 the ability to deal more alpha damage than any other Tier 6 SPG. On the downside, it has a very slow reload time and it is rather inaccurate. It's large splash radius will none the less ensure that your opponent receives at least some kind of damage. B-4 can only carry 12 shells, which in most cases is enough thanks to the low rate of fire. It can also fire AP shells, which some people may find handy in close quarters combat for their high damage potential and good penetration.

S-51 shares the same radio and engine as KV, so that leaves only suspension and the gun to be researched. You must get suspension first as you can't mount the gun without them. They also make S-51 turn around more favourably and accelerate faster, making it rather fast for it's size. With the upgraded suspension, S-51 turns faster than M12 with upgraded suspension, but still loses to GW Panther's unmatched agility.

On end of 1943, the GAU began the re-designing of mobile heavy duty self-propelled artillery systems. Ten years earlier, it was supposed to arm a platform with the 203-mm howitzer model 1931, with production planned to resume at the factory "Bolshevik" in 1944. If it succeeded, WPRA would get a mobile devastating weapon. By order of the Commissar of weapons Ustinov in November 1943, a competition to develop self-propelled guns was announced, which received the semi-official title of "Knight".

Within weeks, some preliminary drafts were presented from plant № 100 NKTP, CB Uralmash, and TsAKB. The first of them, created under the leadership of J. J. Kotin, was a self-propelled gun carriage with trailer that, in some ways, resembled the French GPF 194, but with a more powerful gun. Draft CB UZTM had two options; a 203-mm howitzer B-4 on the chassis of the KV-1S (modernized draft SAC U-19) or two 152-mm howitzers on two SU-122 chassis. Before using its gun, it was supposed to connect both chassis; preparation to firing was about 30-40 minutes, versus 20 minutes with the Kotin design. It is clear that the development of plant number 100 and UZTM won't give adequate fire support due to its technological complexity. In order to build a single prototype, only TsAKB submitted a draft SAU under the symbol "S-51". The chassis of the KV-1S was considered for the base of the S-51, but it was quickly discovered that the length of the support-surface was insufficient and needed adjustment: a modified version with 7 or 8 rollers. However, NKTP was reluctant to change its production because the amount of modifications required was relatively large, and the number of issued ACS was unlikely to be exceed several tens of units. To this end, it was decided to establish a howitzer on the chassis of an unaltered KV-1S anyways, which was not the best solution. The chassis did not undergo any major change, except for the engine. The tank turret was dismantled, and a 203-mm howitzer B-4 was mounted on the open gun-carriage. Because the weight of the 203mm howitzer was slightly heavier than the weight of a fully-loaded turret, the full combat-load weight was almost 50 tons. Thus, it was not expected to have good mobility.

The first prototype of the S-51 entered factory tests in February 1944, conducted under the reduced program. However, interest in high powered artillery was so great that it was still not finished was transferred to ANIOP. Here, all of the major disadvantages of the S-51 were revealed. Because of the high line-of-fire when firing, the self-propelled chassis was strongly swayed by inertia and would move to a lateral displacement. The elevation angle was relatively small, and the recoil was so strong that the crew could not hold on their seats. 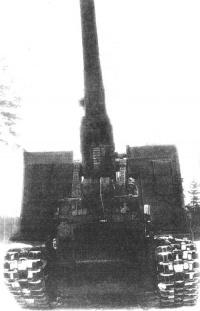 S51 prototype
The severe recoil, large size and weight of its projectiles, and the extreme discomfort for the crew would require the installation of a rammer/loader. In addition, the chassis of the KV-1S proved it was clearly not a good platform on which to install guns of this caliber. After comparing all the data obtained in the COD, it was felt that the S-51 still be sent to production, but to no success. First of all, the issue of using KV-1S chassis was resolved in December 1942: the required amount of modifications for heavy self-propelled guns was only possible with the serious alteration of serial machines. Another important reason was the lack of the B-4 howitzer, which was not in production-scale numbers.

In return, engineers and design bureaus TsAKB plant number 100 had developed a version of an SPG on the chassis of a heavy tank, with the installation of a 152-mm howitzer BL-2. A prototype self-propelled guns, named S-59, was made in early 1944 on May-June, and underwent range tests. There is some discrepancy in the data on the type of equipment. According to factory records, S-59 received the chassis and body from the IP-85, but according to a report on the tests, the self-propelled gun had the "improved chassis of the heavy KV tank ". However, when firing a full charge, the S-59 began to have problems similar to that of the S-51, so mass production of the unit was not raised. As a result, this direction in the development of ACS fire-power ended.

Nevertheless, the projects of heavy self-propelled guns continued to appear until the end of the war. For example, on July 29 1944, head of the Leningrad branch TsAKB Igor Ivanov presented the "technical adjustment of the IEC preliminary draft of ACS", which was supposed to use the chassis of paired T-34 tanks and the 210-mm gun BR-17 or 203-mm howitzer BL-18 . Based on a draft presented a year earlier of the proposed CB UZTM, this ACS differed by a more simple design. This development by TsAKB aroused some interest in the leadership of the People's Commissariat of Arms, but the timing of the project was not realistic; a prototype self-propelled gun was required to be submitted not later than 30 September of that year, and thus failed at the challenge of Leningrad.
click to read more...

Soviet Tanks
Self-Propelled Guns
Retrieved from "http://wiki.wargaming.net/en/index.php?title=Tank:S-51&oldid=14763"
Categories:
Your location:
To log in, select the region where your account is registered
CIS Europe North America Asia Republic of Korea
Or use Microsoft Login to enter WoT XBOX ecosystem
Log in