Chinese tanks, for the most part, have unparalleled mobility, good camouflage values and sloped armor. This makes their tanks very flexible regardless of if they are a heavy, medium, or light. They still play as you would expect, but they can often change their combat role a bit, should it be necessary. However, they have very poor gun depression, even worse than German or Russian tanks, and arguably the worst in the game. They also have very poor module health, and their modules are usually exposed. This results in frequent crew loss, destroyed tracks, engine fires, or even ammo rack detonation. However, while most Chinese tanks have (comparably) poor hull armor, their turret armor is unparalleled, sometimes even surpassing the hull armor values of heavy tanks.

Chinese Light Tanks are fast, agile, and have good penetration and accuracy. They play very much like medium tanks. Their armour is really the only thing identifying them as light tanks. They receive the worst hitpoint pools and also lack firepower to compete with other nations' light tanks.

Chinese Heavy Tanks are also similar to the Soviet models on which they were based. These tanks have good frontal armor and acceleration and faster rates of fire, which makes it possible to play them as "heavy" mediums. Later on they focus more on armor sloping and high maneuverability. 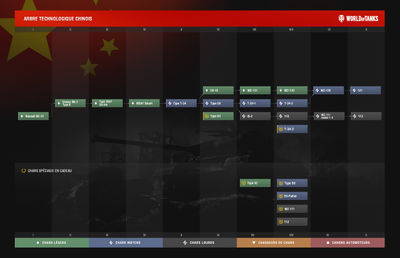 Retrieved from "http://wiki.wargaming.net/en/index.php?title=Tanks_of_China&oldid=224490"
Category:
Your location:
To log in, select the region where your account is registered
CIS Europe North America Asia Republic of Korea
Or use Microsoft Login to enter WoT XBOX ecosystem
Log in