Difference between revisions of "Tanks of Germany"

German tanks have moderately thick armor with an abnormally high HP pool for most of their tanks. They have the second most accurate guns, just below the British. However, they have low alpha damage compared to other tanks, and they are slow to move and prone to module damage and loss of crew.

German light tanks are just below the USSR in terms of maneuverability, but they have well armored fronts and are able to bounce shots to their sloped fronts if angled correctly.

German medium tanks tend to be larger targets than their counterparts, but if you keep this in mind and stay at a distance, the German guns will make short work of your enemies. Some of them have good armor, but all of them share good penetration and accuracy. There are two lines: the E-50 line, which consists of counter-assault sniping units, and the Leopard I line, which consists of more mobile support sniper units.

German heavy tanks have thick all around armor, but share a common weakness in a weaker lower glacis plate, allowing even low tier guns to penetrate their otherwise sturdy frontal armor. But this is paid back with good penetration. These tanks are used to absorb damage for the team, while slowly crawling towards the enemy base. The Maus and E-100 are the lagest and heaviest tanks in the game, weighing 188 tons and 130 tons respectively. Though there are two lines - the Porsche (Maus) and Henschel (E-100) lines, they are both fairly similar in playstyle as counter-offensive heavies.

German tank destroyers are fairly big and thus hard to hide, but are equally armored with the Americans. They combine their armor with powerful cannons and the accuracy of a sniper, and these tanks can destroy higher-tier tanks from across the battlefield.

German self propelled guns are accurate and quite maneuverable, allowing them to quickly change position after firing to dodge any counter-fire lobbed in their direction. They may not have as much firepower as their counterparts, but are unmatched in their accuracy and maneuverability. This is however not the case with the T9 and T10 arty, which are large, slow to turn, and decidedly middle of the road in terms of their gun. Less accurate but more powerful than the French and Russians, and faster firing but not as powerful as the Americans. 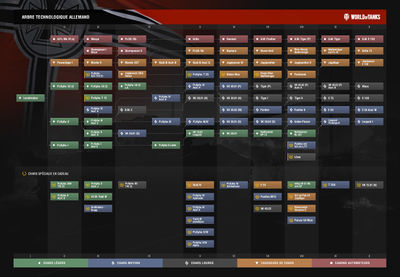 Retrieved from "http://wiki.wargaming.net/en/index.php?title=Tanks_of_Germany&oldid=91569"
Category:
Your location:
To log in, select the region where your account is registered
CIS Europe North America Asia Republic of Korea
Or use Microsoft Login to enter WoT XBOX ecosystem
Log in