The SU-76 is a Soviet tier 3 tank destroyer

The SU-76 is the first Russian tank destroyer that combines high penetration, accuracy and view range with a reasonable damage output. Thereby it can be called the first real sniper that a player can reach in World of Tanks. Additionally, it has exceptional camouflage values, allowing it to fire from a covered position and remain hidden from all but the closest enemies. This is very helpful, as the SU-76 has extremely thin armor and will not survive almost any enemy fire.

The SU-76's strength lies in long range combat, where it can easily kill any opponent it encounters. At the same time, it has nearly no defense against fast moving enemies that can close the distance, and there are many fast tanks in the lower tiers. If it wishes to survive, the SU-76 should always stay behind the frontlines and support other tanks. Ideally, the SU-76 does well from spots overlooking large open areas, but really suffers in city maps where it must play very cautiously. 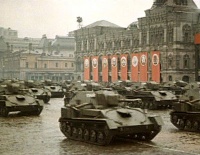 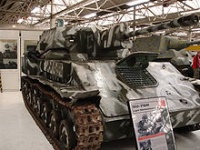