Virtually all ships offer a choice of ammunition.
Ammunition comes in two variants in World of Warships: high explosive and armor piercing. All ships with main battery guns have the option of firing HE or AP (with the exception of tech-tree British cruisers). Secondary guns are set to fire a specific shell type and cannot be loaded with the other type; which shell type can be checked in-port by hovering the cursor over the secondary gun stats. Whether loaded into the main battery or secondary guns, understanding how the two shell types behave and when to use them is key to achieving optimum results in a battle.

The two forms of ammunition are High Explosive (HE) and Armor Piercing (AP), denoted by the yellow and red striped shells, respectively, at the bottom of the UI. Ammo types can be switched by single clicking either "1" or "2" (by default) — in which case the selected shell will load after firing the currently loaded type — or by double-clicking the corresponding button, which will force the reload cycle with the selected type. The commander skill Expert Loader allows the force reload of the selected type to be reduced by 50% of the regular time, provided the guns are already loaded.

It is entirely possible to have all four happen individually in one salvo (to different shells). There is also the peculiarity of a single shell doing all three forms of damage (10%, 33% and 100%) simultaneously. It is not entirely clear if this is intentional game design or not, and is difficult to reproduce.

Simply put, AP shells do more damage, but require careful aiming to achieve penetrations, while HE shells do less damage, but in turn light fires and ignore angling.

When to Use AP 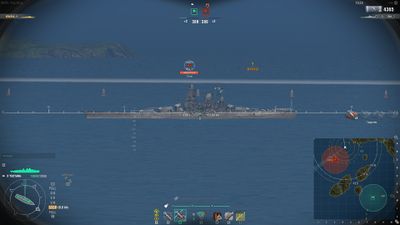 A 4,000 damage AP salvo from a destroyer on a Yamato at mid-range. Note the penetration ribbons on the right.
Armor piercing shells do damage by penetrating the target and then detonating inside the ship. AP requires, in general, an un-angled section of armor that is thin enough to penetrate. As such, AP is effective against broadside targets and weakly armored targets.

Battleships should be firing AP at most targets, as their large caliber and high penetration allows them to usually do damage upon successful hits. Aiming for the waterline on most targets should be fine, but some heavily armored battleships have belt armor thick enough to bounce other battleship AP shells, so aiming above the main belt will work better.

Cruisers should fire AP when presented with an almost completely broadside target. Cruiser guns have significantly lower penetration than a battleship guns, so more careful aiming is required to hit lightly armored sections of armor. A good rule of thumb is to aim for the armor belt just below the deck line on most battleships, and at the waterline for other cruisers and aircraft carriers at close range.

Destroyers do not normally fire AP, but if presented with a perfect broadside at close range, regardless of the target's class, they should load AP. Even the 100mm guns of Akizuki are capable of landing a couple thousand damage AP salvos on a broadside battleship (particularly the superstructure). Destroyers can also use AP against other broadside destroyers, but if there is a lack of damage HE is probably the better choice.

For British battleships, German battleships, and German cruisers, the HE penetration is calculated by dividing the shell diameter by 4 instead.

HE penetration can be increased through the use of the Level 4 commander skill Inertia Fuse for High Explosive, which increases the penetration by 30%. This is useful for allowing light cruisers with 150-180mm guns to achieve over 32mm of penetration with their HE rounds, allowing them to damage the bow, stern, and plating of many high tier battleships more consistently. It is also useful for the Tier VIII Japanese destroyer Akizuki, which has 100 mm guns, allowing her to damage other equal and higher tier destroyers with 19mm armor plating.

Using our two previous examples and multiplying the penetration by 1.3:

When to Use HE

Battleships should only fire HE at another angled battleship at range. Their AP damage is consistent enough that the HE is usually not worth using. Against destroyers, the question of HE vs. AP largely depends on the situation. A battleship that is GUARANTEED to get a shot on a destroyer should consider spending the 15-30 seconds to reload HE. Captains that need to quickly fire a shot off while a destroyer is spotted, however, should fire whatever shell type is loaded (usually AP).

Cruisers primarily fire HE. Their AP simply doesn't have the penetration required to get consistent damage on non-broadside targets, so HE is the go-to shell type. Furthermore, a cruiser's rate of fire allows them to rapidly light and re-light fires on multiple targets to stack significant fire damage. Cruisers should also fire HE against destroyers (except in rare cases, such as Tier X Russian destroyer Khabarovsk).

Destroyers, like cruisers, primarily fire HE at every target, unless they present broadside. Keep in mind that many destroyers' primary source of damage is torpedoes, and they should limit main battery usage to avoid detection.

Fires are the primary form of damage over time in World of Warships (the other being flooding), and is a vital source of damage for most cruisers and some destroyers.

High explosive shells have an attributed fire chance to them; however, it is important to note that higher tier ships have greater built-in fire resistance that reduces this fire chance. The fire chance of main battery and secondary battery shells can be increased through the use of signal flags and commander skills.