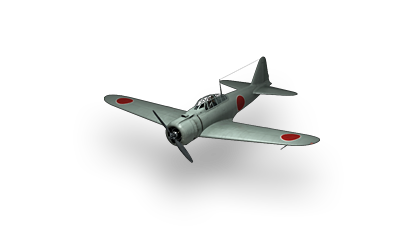 Standard representative of the Japanese branch with good maneuverability. A very low strength and speed - this will continue in the future Aviator branches. Weapons is not the worst but not the best. The advantage is that all the weapons one caliber, and it's more comfortable shooting. Bend time of 10 seconds is the best result at the level we twist no one can. As a result, we get a good enough plane for cornering fights, this style of play will continue in this thread and more.

Get involved in a landfill, tenacious opponents sit on their tails, which we did not notice. Avoid frontal attacks in all cases.

In general, the game on the Japanese aircraft involves careful maneuvers.

Mitsubishi assigned the task of designing the new fighter to a team led by Jiro Horikoshi (original creator of the similar but unsuccessful Mitsubishi 1MF10, and later responsible for the famous A6M Zero). The resulting design, designated Ka-14 by Mitsubishi, was an all-metal low-wing fighter, with a thin elliptical inverted gull wing and a fixed undercarriage, which was chosen as the increase in performance arising from use of a retractable undercarriage was not felt to justify the extra weight. The first prototype, powered by a 447 kW (600 hp) Nakajima Kotobuki 5 radial engine, flew on 4 February 1935. The aircraft far exceeded the requirements of the specification, with a maximum speed of 450 km/h being reached. The second prototype was fitted with a revised, ungulled wing, and after various changes to maximize maneuverability and reduce drag, was ordered into production as the A5M.

The aircraft entered service in early 1937, soon seeing action in pitched aerial battles at the start of the Second Sino-Japanese War, including air-to-air battles with the Republic of China Air Force's Boeing P-26C Model 281 "Peashooters" in what was the world's first-ever aerial dogfighting and kills between monoplane fighters built of mostly metal.

Some A5Ms remained in service at the end of 1941 when the United States entered World War II in the Pacific. US intelligence sources believed the A5M still served as Japan's primary Navy fighter, when in fact the A6M 'Zero' had replaced it on first-line aircraft carriers and with the Tainan Kōkūtai in Taiwan. Other Japanese carriers and Kokutai (air groups) continued to use the A5M until production of the Zero caught up with demand. The last combat actions with the A5M as a fighter took place at the Battle of the Coral Sea on 7 May 1942.
click to read more...