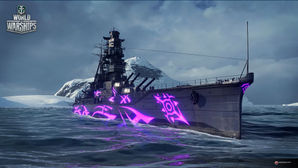 A Battleship of the "Fleet of Fog". Modeled after the lead ship of the Imperial Japanese Navy's Kongo-class, Kongo. As the flagship of the "First Oriental Fleet", her Mental Model "Kongō" honors the Admiralty Code above all else. She seeks to eliminate the submarine I-401, who chose to deviate from the Code. This warship has been specially designed for World of Warships, and is modeled after Kongo as she appears in "ARPEGGIO OF BLUE STEEL -ARS NOVA-".

While ARP Kongo is a great reproduction of Kongo as she appears in the anime series Arpeggio of Blue Steel -Ars Nova-, she unfortunately (and fortunately for every-ship else) does not come with the overwhelming firepower, blistering speed, submergence ability, matter destroying corrosive warheads, annihilating super-graviton cannon, and impenetrable wave force armor of Kongo in Ars Nova. In other words, in the game she is a standard Kongo, and will have to resort to intelligent tactics like any other warship to gain an upper hand.

As she performs exactly like standard Kongo(C), see the article on Kongo for her performance appraisal.

ARP Kongo comes fully upgraded, with the same upgrade slots found on Kongo and a captain which may or may not have free Commander Skill points, depending on the event and region.

As this is an ARP ship, ARP Kongo cannot mount any camouflages.

Kongō (Kongou), in the Ars Nova anime adaptation of the Arpeggio of Blue Steel (Aoki Hagane no Arpeggio 蒼き鋼のアルペジオ) manga, commands one of the fleets that are blockading Japan. Aware of the I-401's existence, she assigns the heavy cruiser Takao to intercept the I-401’s attempt to reach Yokosuka port. Takao falls victim to the I-401, however, and ends up switching sides so that the I-401’s human commander, Gunzō, might command her. Kongō sees this as blasphemy and in blatant disregard to the Admiralty Code. She also sends the fast battleships Haruna and Kirishima to assault Yokosuka and draw out the I-401. Kongō becomes increasingly vexed as these two ships also fall to the I-401 and her human commander Gunzō. As a result, she devotes all her resources to pursuing Iona and the other Mental Models who joined Blue Steel. She believes to be acting abnormally due to their contact with Gunzō. After several other altercations, a large battle ensues. Will Iona be able to get Kongō to listen to reason, or will she ultimately fall to Kongō's plans?

In the Cadenza film, she returns wearing a different outfit and helps to save I-401 and restore her systems from the Student Council Fleet. She then engages in a fight with her sister Hiei, allowing I-401 to deal with Musashi. Her actions put the I-401 on equal footing in the climax of the movie, but can the I-401 and her human crew exploit the opportunity?

Sadly, Kongō’s role in the manga is more peripheral, often seen as a character who is on the sidelines communicating with the other Mental Models. Her role comes to fruition in later chapters, however.

Kongō (金剛, "Indestructible", named for Mount Kongō) was a warship of the Imperial Japanese Navy during World War I and World War II. She was the first battlecruiser of the Kongō class, among the most heavily armed ships in any navy when built, and the last capital ship to be built outside Japan. Her designer was the British naval engineer George Thurston, and she was laid down in 1911 at Barrow-in-Furness in Britain by Vickers Shipbuilding Company. Kongō was the last Japanese capital ship constructed outside Japan. She was formally commissioned in 1913, and patrolled off the Chinese coast during World War I.


Kongō underwent two major reconstructions. Beginning in 1929, the Imperial Japanese Navy rebuilt her as a battleship, strengthening her armor and improving her speed and power capabilities. In 1935, her superstructure was completely rebuilt, her speed was increased, and she was equipped with launch catapults for floatplanes. Now fast enough to accompany Japan's growing carrier fleet, Kongō was reclassified as a fast battleship. During the Second Sino-Japanese War, Kongō operated off the coast of mainland China before being redeployed to the Third Battleship Division in 1941. In 1942, she sailed as part of the Southern Force in preparation for the Battle of Singapore.


Kongō fought in a large number of major naval actions of the Pacific War during World War II. She covered the Japanese Army's amphibious landings in British Malaya (part of present-day Malaysia) and the Dutch East Indies (now Indonesia) in 1942, before engaging American forces at the Battle of Midway and during the Guadalcanal Campaign. Throughout 1943, Kongō primarily remained at Truk Lagoon in the Caroline Islands, Kure Naval Base (near Hiroshima), Sasebo Naval Base (near Nagasaki), and Lingga Roads, and deployed several times in response to American aircraft carrier air raids on Japanese island bases scattered across the Pacific. The Kongō participated in the Battle of the Philippine Sea and the Battle of Leyte Gulf in 1944 (October 22–23), engaging and sinking American vessels in the latter. Kongō was torpedoed and sunk by the submarine USS Sealion while transiting the Formosa Strait on 21 November 1944. She was the only Japanese battleship sunk by submarine in the Second World War, and the last battleship sunk by submarine in history.

The pagoda mast of ARP Kongō is inaccurate, as the game's model of Kongō (on which ARP Kongō is based); it is actually modeled after Hiei. Hiei sported a mast that was distinct from that of her sisters, which was a prototype of the masts that were eventually given to Yamato and Musashi. Also, ARP Kongō lacks the air search radar that was fitted on top of her range finder, and while there is a fully textured plane on ARP Kongō, the Fleet of Fog ships in Ars Nova never carried aircraft.