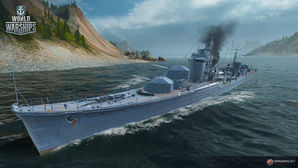 Tier VIII's Akizuki is a major departure from the rest of the Japanese destroyer line. She packs both more guns and fewer torpedoes than any of her cousins that surround her on the tech tree, giving her a very different playstyle than any ship before or after. She is a unique ship that requires a completely different approach to the typical ninja-like playstyle of other Japanese destroyers that attempt to overwhelm their enemies with torpedoes fired from stealth. She shares a number of similarities with high-tier Russian destroyers Udaloi and Khabarovsk; captains familiar with how those ships play will likely feel right at home in Akizuki.

Akizuki’s main battery is comprised of four (4) double 100mm turrets. Unlike most Japanese destroyer gun turrets, these turn quickly, roughly on par with those found in the middle tiers of the American destroyer line aboard Nicholas, Farragut, and Mahan. She can get all of her guns on target even while maneuvering, and their rate of fire rivals that of Tier X American destroyer Gearing (although Akizuki’s shells do far less damage than Gearing’s). Also notable is the initial velocity of those shells: 1000 meters per second. This gives Akizuki’s guns a relatively flat arc at close range; they are comfortable to fire and fairly easy to guide on to target. However, her shells lose velocity quickly, and beginning around 10 km they will have a very high ballistic arc similar to those of Atlanta. This is not necessarily a bad thing, as it enables her to fire over islands when needed. Her main battery is equally capable of chewing up battleship and cruiser superstructure with armor-piercing rounds or dueling enemy destroyers with high explosive ones.

While her guns are excellent, her torpedo armament is lacking. She mounts only a single quadruple launcher — compared to the double quadruple launchers of Kagero, Shiratsuyu, and Yūgumo — on a relatively long reload of 112 seconds. Akizuki has access to an improved version of the Torpedo Reload Booster consumable without having to give up access to Smoke Generator, so she is capable of doing significant damage with her torpedo armament against unsuspecting captains by virtue of mounting the same Type 93 mod. 2 torpedoes that Kagero carries. She is the only ship able to mount both consumables at the same time. Like the "Shiratsuyu", her Torpedo Reload Booster consumable reloads faster than the one found on other ships.

Her handling takes some getting used to — she is far slower to respond to helm commands than Japanese destroyer captains will be accustomed to — and her slow top speed is a notable handicap. Still, her anti-aircraft suite beats out every other Japanese destroyer in the game, and she has the customarily low detection radius typical of her sisters. Akizuki requires some adaptation in play, but she's more than capable of dishing out copious amounts of punishment in the hands of a captain who has taken the time to decipher how to play her well.

When facing American and Soviet destroyers her tier or higher, captains are advised to use armor-piercing rounds as Akizuki’s 100mm HE shells lack sufficient penetration to deal consistent damage.

A gunboat destroyer like Akizuki is inevitably going to come under heavy fire; the abbreviated cooldown on Damage Control Party II will eventually pay for itself. Shelling out the doubloons or credits here is highly recommended. Her low speed also makes the shortened cooldown on Engine Boost II highly attractive. Paying for Smoke Generator II is captain's choice, but there are times that the shortened cooldown on smoke is the difference between sneaking away and going to the bottom.

Victor Lima and India X-Ray signal flags will help boost Akizuki’s meager fire chance, especially when combined with Demolition Expert. Juliet Charlie should also go along with those flags in order to prevent detonations. Sierra Mike will help make up some of her deficiency in top speed. 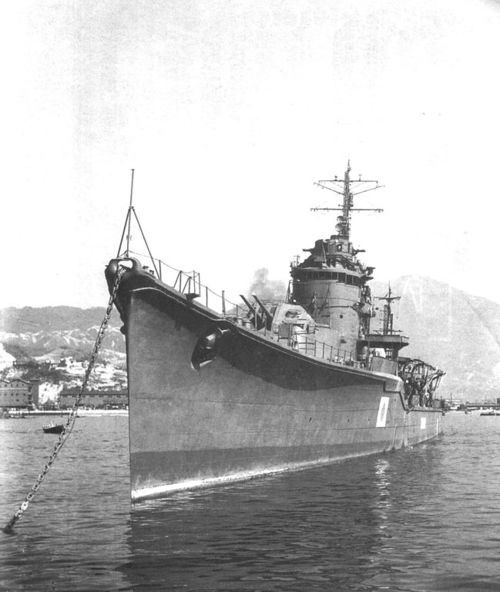 Teruzuki was commissioned in August of 1942 and spent the next two months in trials before being assigned to the South Pacific in October. Shortly after arrival, Teruzuki participated in both Naval Battles of Guadalcanal. After a brief assignment to Truk, Teruzuki returned to the Shortlands Islands to support a supply mission to Guadalcanal. On 11 December, Teruzuki was torpedoed by a PT boat. Teruzuki lost power and fires progressively spread, leading to catastrophic explosions. Teruzuki sank on 12 December 1942.

Hatsuzuki was commissioned in December1942 and also spent her wartime service in escort duties. In June of 1944, she participated in the Battle of the Philippine Sea. In October she was assigned to the Northern Force for the Battle of Leyte Gulf. Hatsuzuki was sunk by surface gunfire on 25 October 1944.

Wakatsuki was commissioned in May of 1943 and, after several months spent training, was assigned to fleet escort duties. She participated in the Battle of the Philippine Sea and the Battle of Leyte Gulf before being assigned to escort troop convoys to Leyte in November of 1944. On 11 November 1944, Wakatsuki was sunk by air attack.

Shimotsuki was commissioned in March of 1944 and finished training in time to participate in the Battle of the Philippine Sea in June. She then engaged in fleet escort duties up to, during, and after the Battle of Leyte Gulf before being sent to the Southwestern Area. On 25 November 1944, Shimotsuki was torpedoed and sunk by submarine.