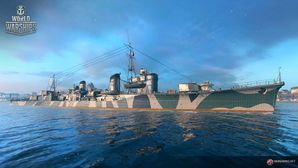 Plantilla:AA Sidebar Warning Insert Asashio is externally very comparable to her Tier VIII tech tree compatriot Kagero. They share nearly identical concealment ratings, maneuverability statistics, guns, and health. The two ships are extremely similar, but Asashio plays completely differently due to her unique torpedo armaments, and by having the Plantilla:Torpedo Reload Booster occupying a separate consumable slot (as with Akizuki).

Technically speaking, Asashio is the stealthiest destroyer in her matchmaking spread, having a slightly smaller air detection radius than Kagero and HSF Harekaze. This allows her to control vision and spotting ranges exceedingly well, utilizing her stealth as another layer of armor against enemy vessels. It is armor she desperately needs, as Asashio’s main weapons are her torpedoes, though her guns can be used in certain situations. It's her torpedoes which make her truly unique: Asashio is equipped with a deep water variant of the same Type 93 mod. 2 torpedoes found aboard other Tier VIII and IX Japanese ships, and similar to those found in the Pan-Asian destroyer line. They have increased flooding chance, are harder for enemies to detect, and have a whopping 20 kilometer range while still retaining 67 knots of speed... but can only hit battleships and aircraft carriers.

As a result of Asashio only being able to damage battleships and the rare aircraft carrier with her torpedoes, she is a highly specialized ship: designed to really only do one thing, but to do it exceptionally well. She has only her guns with which to combat enemy cruisers and destroyers, a state of affairs that leaves her highly vulnerable to both ship types. Captains should not be afraid to use Asashio’s guns, however, as strategically engaging key targets can lead to the difference between a win and a loss. Using her concealment to avoid unwinnable fights is also a valid strategy, and can keep her in the game for longer.

As a Premium ship, Asashio doesn't have any upgrades to research.

The recommended upgrades for Asashio are as follows: 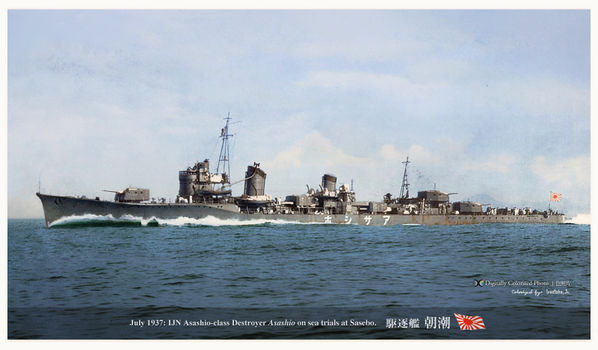 Asashio was the first destroyer of the IJN to have a displacement greater than 2,000 tons. During her initial trials, she suffered from steering problems and issues with her unreliable new 50,000 shaft horsepower turbines, but these flaws were ironed out for the class as a whole by the beginning of the Second World War. Issues aside, the overall design for Asashio was considered successful, and her design was repeated in the later Kagero and Yūgumo classes. Asashio herself spent her pre-war service in training and modernization to fix her outstanding issues, before Japan joined the war.