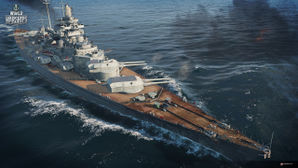 By the start of World War II, Bismarck was one of the mightiest battleships in the world, owing to her advanced gun fire control system and powerful artillery. Rugged construction — coupled with elaborate subdivision into compartments and a vast expanse of armor — ensured a high level of endurance.

The historical pinnacle of German battleship construction, Bismarck stands as one of the heartiest battleships at Tier VIII. While her main battery may not look as impressive of that of Amagi and she doesn't have North Carolina’s range — or even her sister Tirpitz’s torpedoes — Bismarck has the perfect mix of ingredients to make her an excellent brawler.

For starters, her secondary battery is the most impressive of all the Tier VIII battleships. It comes with a stock range of 7km, and with the right mix of modules and commander skills can be pushed to a range of over 10.5km, almost equivalent to the range of a similarly-equipped Yamato. This creates a large radius around her which enemy units must respect or pay a hefty price. Additionally, her handling is superb for a ship her size; she's quick to respond to rudder commands, and her turning circle is better than that of Amagi. Easily the most impressive thing about Bismarck is her survivability. Like her sister Tirpitz, she is exceptionally difficult to land citadel hits against; only long-range plunging fire has a good chance of doing so. The closer she gets, the better her armor scheme protects her from incoming fire. She will take more than her fair share of regular penetration damage from enemy armor-piercing rounds, but that damage repairs better than citadel damage.

Bismarck has another trick up her sleeve that sets her apart from Tirpitz: access to the Hydroacoustic Search consumable. This provides her with large windows of time where she is functionally immune to long range torpedoes, and also provides detection of enemy ships hidden in Smoke Screens when pushing into capture zones.

When all of that is paired with an above-average anti-aircraft suite, Bismarck is a very well-rounded, highly survivable battleship that is friendly to players of all skill levels.

Ship Review: Mouse in the Bismarck from the NA forums. Tested in patch 0.5.10

Hull (B) is the best thing for players to research first, as it maximizes her anti-aircraft armament and provides additional hit points. The propulsion upgrade is the next best module to invest experience gains in; having all 31 knots to play with gives Bismarck more flexibility to close with the enemy or respond to new threats as required.

Secondary Battery Build: The most common build for Bismarck will maximize her secondary battery by equipping Secondary Battery Mod 2, along with the usual suspects for battleships: Main Armaments Mod 1 and Damage Control Mod 1. Upgrade Slot 5 offers an interesting choice between Steering Gears Mod 2 and Damage Control Mod 2 that is left to individual captains; Upgrade Slot 6 is likewise captain's choice.

Anti-Aircraft Build: Another possible build is to maximize Bismarck’s AA suite; it is similar to the Secondary Battery Build above, but uses AA Mod 2 in Upgrade Slot 2. Players wishing to minimize their vulnerability to enemy aircraft should equip Concealment System Mod 1 in Upgrade Slot 6.

Secondary Battery Build: Following along with the theme of maximizing the punishment dished out by Bismarck’s secondaries, captains should invest in Basic Firing Training, Expert Marskman, Superintendent, and Advanced Firing Training. Manual Control for Secondary Armament is a strong skill in this build, but it only allows the ship's secondaries to fire at a single target at a time. Some captains will prefer this skill; others will not. Extra skill points should be invested in either Basics of Survivability, High Alert, or Vigilance, as desired.

Players who wish to spend doubloons can equip Bismarck with Type 18 camouflage that lowers her detection radius, reduces the accuracy of incoming shells, reduces her repair costs, and increases the amount of experience she earns.

Players who have followed the Secondary Battery Build above will want to equip Mike Yankee Soxisix and India Delta signals in order to further boost the effectiveness of their secondaries and Repair Party consumable, respectively.

Players following the Anti-Aircraft Build may wish to equip November Echo Setteseven for the bonus to AA gun damage. 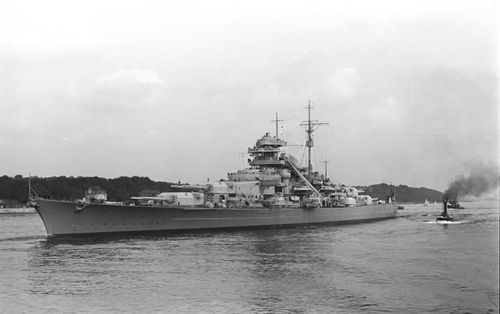 Bismarck was the first of two Bismarck-class battleships built for Nazi Germany's Kriegsmarine. Named after Chancellor Otto von Bismarck — the primary force behind the unification of Germany in 1871 — the ship was laid down at the Blohm & Voss shipyard in Hamburg in July 1936 and launched in February 1939. Work was completed in August 1940, when she was commissioned into the German fleet. Bismarck and her sister ship Tirpitz were the largest battleships ever built by Germany, and two of the largest built by any European power.

In the course of the warship's eight-month career under its sole commanding officer, Kapitän zur See Ernst Lindemann, Bismarck conducted only one offensive operation: Operation Rheinübung in May 1941. The ship, along with the heavy cruiser Prinz Eugen, was to break into the Atlantic Ocean and raid Allied shipping from North America to Great Britain. The British Admiralty learned of the sortie and ordered several ships to patrol the three possible break-out points into the Atlantic. Bismarck and Prinz Eugen were detected moving into the Denmark Strait by the HMS Suffolk and Norfolk on 23 May 1941 at approximately 19:22. Bismarck, the lead ship, went to action stations and Captain Lindemann announced at 20:30 to the crew “Feind in Sicht an Backbord, Schiff nimmt Gefecht auf! (Enemy sighted to port. Engage!)”. Bismarck fired several salvos but failed to score a direct hit. Heavily outgunned, the British cruisers retired to a safe distance and shadowed the Bismarck until reinforcements could arrive. Due to heavy vibration from the main guns firing, Bismarck’s forward radar failed. Admiral Lütjens ordered Prinz Eugen to take the lead position and provide radar coverage.

The following morning, Prinz Eugen detected a ship by hydrophone and at 05:45 sighted two ships which were initially misidentified as cruisers. The two ships were, in fact, the battlecruiser HMS Hood, pride of the Royal Navy, and HMS Prince of Wales, the newest battleship in the British arsenal (she was so new that she still had a variety of shipyard personnel on board testing and maintaining her machinery). At 05:53 the British battleships opened fire on the two German ships. The British admiral on board Hood had intended on targeting Bismarck first, but due to the change in the German battle line Hood targeted Prinz Eugen instead. The German force — on the orders of Admiral Lütjens — did not open fire. After roughly two minutes of fire, Captain Lindemann grew tired of not being given the order to open fire and issued the following directive: "Ich lasse mir doch nicht mein Schiff unter dem Arsch wegschießen. Feuererlaubnis! (I'm not letting my ship get shot out from under my arse. Open fire!)". At 06:01, the fifth salvo fired by Bismarck at a range of 18,000 meters (20,000 yards) struck Hood near her mainmast. The 380mm (15-inch) shell plunged through her decks and caused a magazine detonation. The resulting explosion broke Hood into three sections; she sank in a mere three minutes, taking all but three of her crew with her.

Bismarck and Prinz Eugen then turned their attention to the bewildered Prince of Wales. During this part of the engagement, Bismarck landed seven hits and took three damaging hits in return. Prince of Wales disengaged from the battle and the Bismarck and Prinz Eugen continued their mission. This engagement of 24 May 1941 became known as the Battle of the Denmark Strait and was an unqualified disaster for the Royal Navy.

The damage caused to Bismarck dictated that she return for repairs and that Prinz Eugen continue on into the open Atlantic to commence raiding. It has been reported that Admiral Lütjens and Captain Lindemann argued about which port to return to, with Lindemann advocating a course back through the Denmark Strait to return to Bergen, Norway. Lütjens overruled him and ordered a Bismarck to make for Saint Nazaire, France.

The destruction of Hood spurred a relentless pursuit by the Royal Navy involving dozens of warships, with Prime Minister Winston Churchill demanding that the Bismarck be sunk. Two days later, heading for the relative safety of occupied France, Bismarck was attacked by obsolescent Fairey Swordfish biplane torpedo bombers from the aircraft carrier HMS Ark Royal; one scored a hit that rendered the battleship's steering gear inoperable. In her final battle the following morning, Bismarck was neutralized by a sustained bombardment from a British fleet led by the British battleships HMS King George V and HMS Rodney. Bismarck was eventually scuttled by her crew, and sank with heavy loss of life. Most experts agree that the battle damage would have caused her to sink eventually, regardless.

The remains of Bismarck lie beneath 15,800 feet (4,800 meters) of water approximately 400 miles (650 km) west of Brest, France. The wreck was located in June 1989 by famed naval archaeologist Robert Ballard, and has since been further surveyed by several other expeditions. An expedition led by filmmaker in 2002 noted that despite the torpedo damage to Bismarck’s outer hull, none of the torpedoes that struck her had actually penetrated her protective torpedo bulkhead.