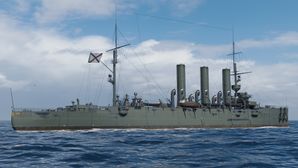 Being a protected cruiser — whose design was typical between the end of the 19th and the beginning of the 20th century — Diana had a reasonably good main battery for her time. The ship was also armed with numerous secondary battery guns. Her vital parts were protected by inclined deck armor.

Diana in game is very similar to her sister ship the Aurora (found at Tier III). She has fewer main guns than Aurora, but she makes up for it by having secondary batteries.

As a premium ship, Diana doesn't have any upgrades to research.

As a premium ship, Diana comes included with Type 9 camouflage that lowers her detection radius, reduces the accuracy of incoming shells, and increases the amount of experience she earns.

Diana (Russian: Диана) was the second of three Pallada-class protected cruisers built for the Imperial Russian Navy. The cruiser served during the Russo-Japanese War and took part in the Battle of the Yellow Sea on 10 August 1904. Later, she served as part of Russian Baltic Fleet during World War I.

Diana actually had a total of 24 secondary guns. The current in-game version has only twelve. The other twelve missing 75 mm guns are located along the sides of the hull, but their hatches are strangely modelled in closed position.