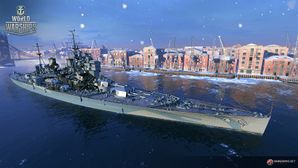 As a premium ship, Duke of York doesn't have any upgrades to research.

The recommended upgrades for Duke of York are as follows:

The majority of Duke of York’s anti-aircraft power is found in her 40mm "pom poms" and 20mm Oerlikons, both of which are highly vulnerable to incoming high explosive shells. As such, Auxiliary Armaments Modification 1 earns the recommendation in Slot 1. Slot 4 could also be filled with Modificación 1 del aparato de gobierno

for captains looking to improve her rudder shift speed.

Duke of York can equip the following consumables:

As a premium ship, Duke of York comes included with Type 10 camouflage that lowers her detection radius, reduces the accuracy of incoming shells, and increases the amount of experience she earns.

As a ship with a good AA battery, November Echo Setteseven (Plantilla:November Echo Setteseven)is the best option for the ship. After that signals helping the survivability of the ship, such as India Delta (Plantilla:India Delta), India Yankee (Plantilla:India Yankee), or Juliet Yankee Bissotwo (Plantilla:Juliet Yankee Bissotwo) are always helpful. To increase her offensive capabilities, signals such as Sierra Mike (Plantilla:Sierra Mike), and November Foxtrot (Plantilla:November Foxtrot) will be useful. As she is a premium ship, XP/captain XP boosting flags such as Zulu Hotel (Plantilla:Zulu Hotel), Equal Speed Charlie London (🚫), or the Dragon Flag (Plantilla:Dragon Flag) will see great gains with this ship. Juliet Charlie (Plantilla:Juliet Charlie) is always handy to prevent a quick trip back to port. 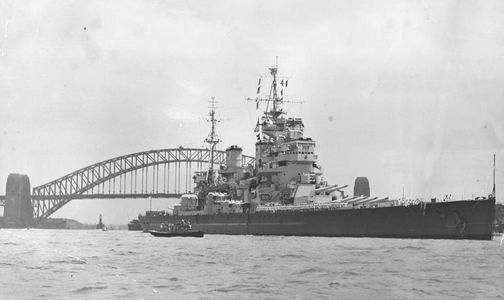 The designs of what would become the King George V class of ships started in 1933. Initially, the government was adamant on pressing ship designs that strictly adhered to treaty limitations, mounting guns with a caliber of 12 inches and limiting to a tonnage of no more than 28,000 tons. The United States and Japan were vehemently against this. By the time of the Second London Naval Treaty in 1936, future battleship limitations were standardized. Gun calibers were to be no bigger than 16 inches with the British delegation pressuring to decrease it to 14 inches. Furthermore, overall tonnage should not exceed 35,000.

HMS Duke of York (pennant number 17) was the third ship of the King George V class, named after the Duke of York peerage. She was ordered on 16 November 1936, and laid down on 5 May 1937 at the Clydebank shipyards by the John Brown and Company, and launched 28 February 1940.

She was originally fitted with six 8-barrelled 2pdr “pom-poms”, and six single 20mm AA guns. She also carried Type 281, 282, 284, and 285 radar sets. As she was a wartime vessel, she only received wartime-upgrades; as there was no time for remodeling. In 1941, she received a Type 273 radar set to complement the ones above. By 1944, 36 additional 20mm AA guns were installed. By 1945, eight 40mm Bofors guns were added. Furthermore, many of the single 20mm were replaced by dual-mount 20mm. And additional Type 274 radar set was incorporated. Most significantly, the original aircraft facilities – one double-ended catapult and 2-4 Supermarine Walrus' – were removed and repurposed as a boat launching area.

HMS Duke of York was commissioned into the Royal Navy on 4 November 1941, subsequently seeing combat service during the Second World War.

In mid-December 1941, Duke of York transported Prime Minister Winston Churchill to the United States to meet President Franklin D. Roosevelt. Between March and September 1942 Duke of York was involved with convoy escort duties, but in October she was dispatched to Gibraltar where she became the flagship of Force H.

In October 1942, Duke of York was involved in the Allied invasion of North Africa, but saw little action as her role only required her to protect the accompanying aircraft carriers. HMS Duke of York stopped the Portuguese vessel Gil Eannes on 1 November 1942 and a commando arrested Gastão de Freitas Ferraz. The British had picked up radio traffic indicating naval espionage, possibly compromising the secrecy of the upcoming Operation Torch.

After Operation Torch, Duke of York was involved in Operations Camera and Governor, which were diversionary operations designed to draw the Germans' attention away from Operation Husky, the invasion of Sicily. On 4 October, Duke of York operated with her sister ship Anson in covering a force of Allied cruisers and destroyers and the American carrier Ranger, during Operation Leader, which raided German shipping off Norway. The attack sank four merchant ships and badly damaged a further seven.

On 26 December 1943 Duke of York was part of a task force which encountered the German battleship Scharnhorst off the North Cape of Norway. During the engagement that followed, Scharnhorst hit Duke of York twice with little effect, but was herself hit by several of Duke of York's 14-inch shells, silencing one of her turrets and hitting a boiler room. After temporarily escaping from Duke of York's heavy fire, Scharnhorst was struck several times by torpedoes, allowing Duke of York to again open fire, contributing to the eventual sinking of Scharnhorst after a running action lasting ten-and-a-half hours.

In 1945 Duke of York was assigned to the British Pacific Fleet as its flagship, but suffered mechanical problems in Malta which prevented her arriving in time to see any action before Japan surrendered.

After the war, Duke of York remained active until she was laid up in November 1951. She was eventually scrapped in 1957.