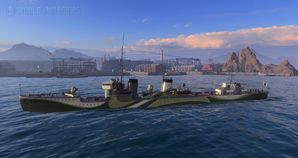 A typical Japanese destroyer that was built using the experience gained during World War I. She boasted a very high speed and powerful torpedo armament. However, her anti-aircraft suite was very weak and her main battery guns had a fairly low rate of fire.

Note: The Kamikaze R variant is an event ship that was obtainable through Project R, a month-long event that was held from 18 January 2016 to 14 February 2016. It is identical to Kamikaze in all respects save appearance; Kamikaze R’s camouflage is suminagashi-themed.

Kamikaze is identical to the Fujin and roughly analagous to the Tier V tech tree ship Minekaze. She has powerful, fast reloading torpedoes that travel 7.0km at 68 knots with a maximum damage of 14,400 points, making her a serious threat to any ship she can spot, and being premium, she avoided the large torpedo nerf that Minekaze received. With a base detection of 6.2km (without camouflage or a captain with Concealment Expert), she has a significant spotting advantage over anything else in her tier that isn't a fellow Japanese destroyer, allowing her to deliver her torpedoes to unsuspecting targets.

As a Tier V ship, Kamikaze has only 3 upgrade slots to use.

Kamikaze gets three consumables: Damage Control Party, Smoke Generator, and Engine Boost. It is recommended to take premium versions of all consumables that have the recourses to spare, but for those captains, whom are cash-strapped, prioritize Smoke Generator II. As it goes, a spotted destroyer is a dead destroyer; therefore, having premium Smoke Generator will provide more chances to disappear from a disadvantageous situation.

As a premium ship, Kamikaze comes included with Type 9 camouflage that lowers her detection radius, reduces the accuracy of incoming shells, and increases the amount of experience she earns. 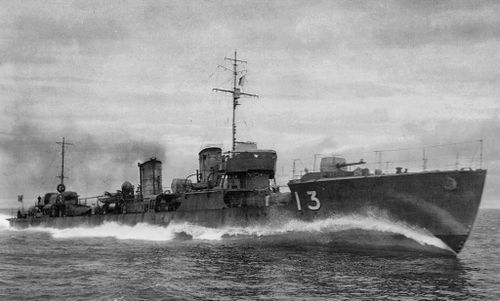