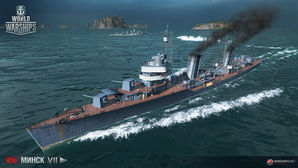 This ship was developed as part of a series of Soviet destroyer flotilla leaders created under Project 38. She was built as a modified version of the destroyer leader Leningrad, retaining the same distinctive features like powerful artillery and a very high speed.

Minsk is extremely similar to the premium Leningrad, but there are a few differences. Most notable are the torpedoes. Minsk’s torpedoes only travel 4.0 km, however, the upgraded torpedoes travel at 65 knots and have 17,933 maximum damage, compared to the 60 knot, 15,100 damage torpedoes of Leningrad. Her main battery also has just over 0.6 km more firing range with the upgraded Fire Control System module, but the turrets take 2.4 seconds extra to turn 180 degrees. Minsk also has less AA then Leningrad, though Leningrad's AA doesn't shoot down much anyways so that is not really a negative. Her gun power is still formidable, and her torpedoes, while short ranged, pack a strong punch that must be respected around islands and in knife fights.

As a Tier VII destroyer with access to four upgrade slots, it's best to mount the following upgrades:

If the player has one of the rare Engine Boost Modification upgrades and has the Sierra Mike signal equipped, it is worthwhile to replace the Propulsion Modification 1 upgrade, as it extends your Engine Boost consumable duration by 50%, thereby allowing you to maintain a max speed of 48.8 kts for three minutes.

As a Tier VII VMF destroyer, Minsk has access to the following standard destroyer consumables:

It is highly recommended to at least mount the premium Engine Boost II consumable to better effectively utilize Minsk's speed, as it has a fantastic base speed of 43 kts and is easily the fastest ship at Tier VII alongside its premium sister ship Leningrad. 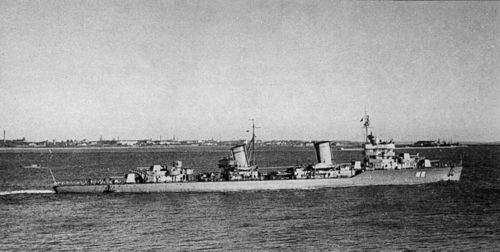 Destroyer leader Minsk and her two sister ships (Project 38) were built after Leningrad, following a slightly modified project but retaining nearly the same specifications. The main differences between Project 38 and its prototype were its different design for the aft hull and a more advanced artillery and torpedo fire control system. All three destroyers of Project 38 were laid down between 1934 and 1935. The lead ship, Minsk, was commissioned at the end of 1938, but it took two more years to complete the other two ships due to delays in construction. Throughout her service, Minsk’s anti-aircraft armament was gradually improved and obsolete artillery systems were replaced with more modern ones.

Minsk first saw combat during the Winter War between the USSR and Finland in 1939-1940. During that conflict, she engaged enemy coastal batteries numerous times. At the beginning of the Great Patriotic War, Minsk was tasked with mine-laying before assisting in the evacuation of Tallinn in August 1941. She later participated in the breakthrough of the Baltic fleet to Kronstadt. In late September 1941, Minsk was sunk in Kronstadt by German bombers. A year later, she was re-floated and repaired. With her repairs complete, Minsk provided fire support to the troops on the Leningrad front by bombarding Wehrmacht positions. Her sister ships were initially included in the Pacific fleet. One of them—Baku—was transferred to the arctic region in 1942, where she had an active role in defending the polar regions of the country, protecting transport routes, and carrying out raids on enemy positions. Following the end of World War II, all three destroyer leaders were re-classified as destroyers. In 1958, the lead ship was struck from the Navy and sunk as a practice target during trials of modern weapon systems. In 1963-1964, the two remaining ships were decommissioned and scrapped.