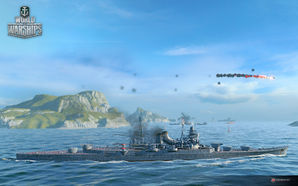 Affectionately called "Mogamin" by some, the Mogami has a rather unique style in gameplay among all the cruisers at the current iteration as she can have two modes of offense: her 155's which can burn or pummel ships or the harder yet slower loading 203's which technically turns her into a heavy cruiser. The 155 guns comes at her stock hull as she was actually armed with them before being reformatted and reclassified as a heavy cruiser in between 1938 to 1939 and once you fully upgrade the heavy cruiser, this heavy cruiser can, to an extent, emulate the infamous US tier 6 light cruiser Cleveland in terms of ability to pummel enemy ships into submission such as battleships which makes her into a more armored version of the infamous American light cruiser with better range albeit with very slow turning turrets. The 203's make her into a standard heavy cruiser that has good damage at the cost of slower loading time and reasonable turret turn although this gives her the much needed punch to deal with other heavy cruisers and potentially battleships. Whatever guns you mount, you will find her to be one dynamic ship at her tier.

Due to her detection range, it is suggested to research hull B, then acquire the top GFCS, then the 203's and finally hull C for more AA guns.

The Mogami class was a series of four heavy cruisers built for the Imperial Japanese Navy during the 1930s. In order to bypass the London Naval Treaty's restriction on heavy cruisers, they were initially armed with 155mm guns despite the class being a heavy cruiser in every other way. Once Japan withdrew from the treaty, the 155mms were replaced with the 203mm guns that the class was designed for and the replaced turrets were given to the Yamato class as secondary armament. All four of the class were lost in combat.