On Ognevoi, these turrets can be a mixed blessing. They have a much faster traverse speed than Minsk’s open mounts, which allows the ship to respond better to changes in the battle. However, with only two turrets, losing a single turret can be severely crippling to Ognevoi, effectively halving the ship's firepower. Thankfully, losing turrets entirely is a rarity once Main Armaments Modification 1 is installed. His 10.0 km torpedo range gives Ognevoi a decent fallback should the worst occur.

As a Tier IX destroyer with access to all six upgrade slots, it's best to mount the following upgrades:

Slot 4: Propulsion Modification 1 (as it relies on its speed as a secondary defense to incoming enemy shells)

If the player has one of the rare Engine Boost Modification upgrades and has the Sierra Mike signal equipped, it is worthwhile to replace the Propulsion Modification 1 upgrade, as it extends your Engine Boost consumable duration by 50%, thereby allowing you to maintain a max speed of 45.4 knots for three minutes.

As part of the new branched line of VMF destroyers, Ognevoi has access to the following consumables:

It is worthwhile to note that Ognevoi has very similar main armament array to the USN destroyer Benson and similar concealment. Players used to equipping Benson with Defensive Fire instead of Engine Boost may find it worthwhile on Ognevoi. However, it should be noted that the anti-air potential of Ognevoi is somewhat weaker than Benson's.

Players looking to keep Ognevoi may choose to invest 3000 doubloons to equip the permanent Type 18 camouflage rather than paying 50 gold per-battle to mount the premium Type 6 camouflage. Type 18 camouflage lowers her detection radius, reduces the accuracy of incoming shells, reduces the cost of repairs, and increases the amount of experience she earns. The premium Type 6, unlike the permanent Type 18, does not provide repair cost reduction benefits. 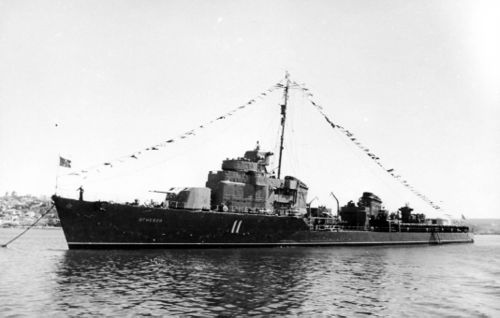