Oktyabrskaya Revolutsiya is a Tier V Russian battleship that features twelve 305mm guns in a 4x3 turret setup. Being an early dreadnought, Oktyabrskaya Revolutsiya is relatively slow — moving at 23 knots in game — particularly given her engine upgrades that she historically received. However, she has strong armor that can resist a large amount of high explosive shells and is very strong at bouncing incoming armor piercing rounds shells. While her AA looks impressive with a long list of flak guns mounted aboard, it is not as strong as that found on Texas as it has less range and lower damage per second.

Oktyabrskaya Revolutsiya's Damage Control Party consumable is her most unique ability. It has an extremely fast cooldown, but trades this for limited charges like most other consumables. This allows Oktyabrskaya Revolutsiya to deal with situations which would put an unrepairable DoT on her, but can leave her in danger of running out of charges, meaning that one must carefully choose when to use this consumable, even with its fast cooldown.

As a premium ship, Oktyabrskaya Revolutsiya doesn't have any upgrades to research.

Upgrade Slot 2 offers two viable upgrade options for Oktyabrskaya Revolutsiya. Aiming Systems Modification 1 reduces the total shell dispersion by 16 meters and provides slight increases to the range and accuracy of the secondary battery. Alternatively, Main Battery Modification 2 may be mounted, which increases the turret traverse time by 5.1 seconds. However, mounting this upgrade will increase the reload time of the main battery by 1.6 seconds.

As Oktyabrskaya Revolutsiya is a special Tier V premium Russian battleship, it has access to the following consumables:

Oktyabrskaya Revolutsiya, unlike other ships, has a special Damage Control Party with limited usability much like Repair Party starting at a base 3 charges, which can then be increased by the skill Superintendent and mounting the premium version of the consumable. It has only 30 seconds of cooldown before it can be used again, with the premium version having only 20 seconds of cooldown. However, players may find themselves at risk when they run out of the Damage Control Party consumable, especially when they are facing enemy destroyers and cruisers armed with torpedoes, as flooding can do severe damage to battleships. Fires may also seem tempting to quickly put out upon being set on fire, but players must be wary that the ship has limited DCP.

As a premium ship, Oktyabrskaya Revolutsiya comes included with Type 9 camouflage that lowers her detection radius, reduces the accuracy of incoming shells, and increases the amount of experience she earns.

Oktyabrskaya Revolutsiya is able to mount 8 signal flags simultaneously. Captains should mount India Delta and November Foxtrot flags to improve the effectiveness of the repair party consumable. Mounting India Yankee flags is also recommended to reduce damage taken from fires. Sierra Mike flags can also be equipped to increase the ship’s top speed. Lastly, economic and special signal flags can be mounted to further increase the experience and credit gain per battle. 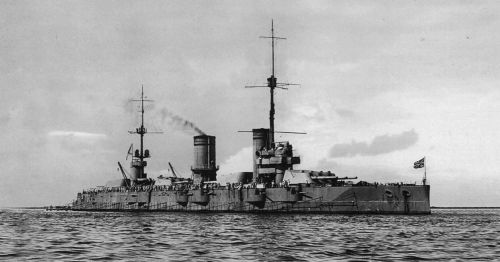 What happened to Oktyabrskaya Revolutsiya in the period between 1944 and 1954 is largely unknown, as the only major records remark upon her radar upgrades. She was reclassified as a “School Battleship” for training uses in 1954 and was later stricken in February 1956, being slowly broken up over the next several years. By 1959, she no longer existed.