Perth is a sister ship to Tier VI British cruiser Leander; however, she has some significant differences. Most notably, she carries a high explosive round — like Belfast (and unlike her sister ship) — allowing her to set enemies on fire with something other than secondaries. Her other primary difference is her smoke screen. Unlike the short deployment time high staying time of typical British cruiser smoke, Perth has a Smoke Generator that deploys smoke continuously for 90 seconds, but each individual cloud of smoke only lasts for 10. This allows Perth to create a "moving smokescreen" so to speak, enabling her to remain invisible for a full 100 seconds if moving at speeds less than 12.5 knots.

In the negative column, Perth’s armor piercing rounds are not the "super AP" of the other British light cruisers, and her anti-aircraft suite is even weaker than that of stock hull Leander. Her low main battery firing range also means she must be played very carefully or she will be quickly removed from the battle by anything that can citadel her; which is, unfortunately, anything in the game with cruiser caliber guns or better. When her short firing range is combined with her woefully mediocre anti-aircraft suite, Perth’s ability to equip either a Spotting Aircraft or a Catapult Fighter — something Leander can't do — becomes an important choice; either will give her some spotting ability outside of her smoke screen, but one will increase her range and the other will help cover her from enemy aircraft.

Perth has more commander skill options available to her, simply by virtue of the fact she has high explosive shells available to her main battery. Skills such as Expert Loader or Demolition Expert are not wasted on her as they would be on her cousin in the Royal Navy cruiser branch, Leander. In point of fact, Demolition Expert might be the best Tier 4 skill available to Perth commanders. Key skills in any Perth commander build are Expert Marksman at Tier 2 and Superintendent at Tier 3.

Perth retains the dependency that her cruiser cousins in the regular Royal Navy tech tree have on their consumables; subsequently, premium versions of ALL consumables are recommended. Smoke Generator II and Damage Control Party II are particularly critical given their impact to to her survivability. 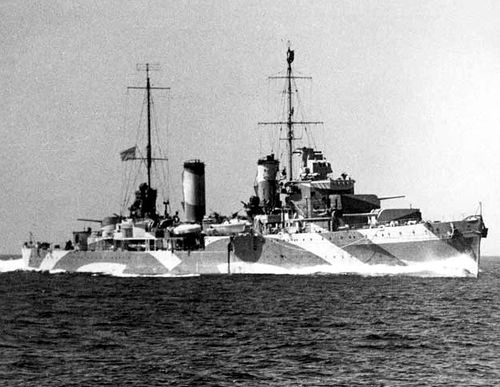 HMAS Perth was designed and constructed as a modified Leander class light cruiser. The original design was intended to fulfill the desire for a cruiser armed with 152mm to serve with fleets. Perth was fitted with the same armament used on the Leander class. The primary difference between Perth and her older sister ships was the adoption of segmented machinery spaces. This allowed for the ship to continue operating should one engine room become inoperable. The main belt armor was subsequently lengthened to protect her larger machinery spaces and the beam of the ship was increased slightly to improve her stability. Two funnels were installed instead of a single funnel due to the split machinery spaces. This limited the space available on deck and prevented a seaplane catapult from being mounted when the ship was first being fitted out. She later received a shortened catapult for use with the Supermarine Seagull.

Perth put to sea again in late November 1941, just in time for the Japanese entry into the war. Assigned to the ABDA command, Perth joined the combined Allied naval forces in attempting to disrupt Japanese landings in the Dutch East Indies. Perth was present for the Battle of the Java Sea in late February of 1942, and along with USS Houston, managed to survive that defeat. HMAS Perth and USS Houston were attempting to make port at Tjilatjap, Sumatra, and from there escape to Australia when, on 28 February, they sailed into a Japanese landing force, the presence of which Allied intelligence was unaware.