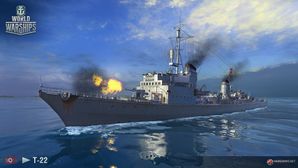 Hull (B) is the first place captains will want to invest experience gains in T-22; the bigger her health pool, the longer she stays in a game. After that, the upgraded Fire Control System module to improve her main battery range is best, saving the improved Torpedo module for last (or skipping it altogether, as it is a fairly minor improvement).

T-22 was the first ship of the Type 39 class torpedo boat completed for the German navy. Unlike previous designs, the Type 39 class ships were constructed for fleet duties. The overall size of these ships was significantly larger than previous designs which allowed for a much heavier armament to be mounted, but this also resulted in a drastic decrease in top speed. The ships of the Type 39 class retained the same triple torpedo launchers used on older torpedo boats and carried a more potent main battery armament to accompany them. Whereas both the Type 35 and Type 37 ships were fitted with only a single 105mm gun, the Type 39 ships had four of these guns. Additionally, these guns were allowed to elevate up to 70 degrees but the lack of high angle fire directors made them ineffective at dual purpose roles.

By the time T-22 was completed, there was a much greater need for anti-aircraft defense. As a result, T-22 and the other ships of the Type 39 design were fitted with additional 20mm and 37mm anti-aircraft guns. The radar mountings on these ships were also improved through a series of refits.