Armored fighting vehicles designed or produced by the nation of France. French tanks tend to be extremely specialized tanks and each should be examined carefully for fit before committing to play it.

French tanks vary wildly between the tiers. but are generally geared to some sort of offensive action. At lower tiers, they accomplish this with great armor but have poor speed and are armed with poor guns. At higher tiers, they are very mobile and armed with great guns, but sacrifice their armor to achieve great performance. Most mid to high tier French tanks have an autoloader with a drum magazine, which allow for several shots in a short period of time. Almost all French tanks suffer from having few crew members which makes for less variety when choosing crew skills or perks, lack of sufficient hull and turret armor at mid-high tier, lack sufficient speed and mobility at lower tiers, and their guns almost always have long aim times. All are meant for offensive action; lower tier French tanks rely on their armor to withstand enemy hits and higher tier French tanks rely on their speed to avoid hits. With the exception to their tank destroyers, lower tier tanks will have trouble stopping heavily armored vehicles advancing on their position and higher tier tanks will find themselves handicapped when holding a position due to the extremely long reload times on the automatic loaders. On all tiers, poor gun depression and poor turret armor prevents them from using hull-down positions effectively.

French light tanks are slow and have thick armour at lower tiers, but they trade their armor for speed at higher tiers. They gain the ability to use autoloaders much earlier than the other French lines. Combined with their high speed and small size, they become deadly hit-and-run vehicles.

French medium tanks are few, and there's a big gap between the tanks that lead to the French Heavies and those that come from the French Lights. Low tiers typically play like their light or heavy tank counterparts. The D2 plays the same way as other low-tier French tanks with thick armour, but poor mobility and an inadequate gun. At T9 and T10 mediums trade their armour for extremely high speed and agility; combined with their automatic loaders, they become great support vehicles that are particularly good for finishing off damaged tanks late in a match. Their paper thin armour makes them very vulnerable to SPG damage however, so keeping on the move is essential.

French heavy tanks start in the mid tiers with a good mix of armour and mobility, although the very first tank down the line has a poor gun. As the tiers rise, the guns get better while they continually trade armour for agility. They use large calibre guns with automatic loaders, which make them very destructive. With their paper thin armour, it is essential to keep moving.

French tank destroyers have relatively weak armour at lower tiers, but have good guns. Later in the line, they gain tough frontal armour along with increased speed, but retain the good guns. Their guns have great penetration values and good accuracy, so they are not to be taken lightly. However, their side armour is rather weak and their front armor is covered in rather obvious weak spots. Due to their size, the later designs have poor camouflage values.

French self propelled guns have good accuracy, quick aim times and high fire rates, but suffer from low gun arcs, slow-moving projectiles, and lower damage and penetration than their rivals. They are the fastest SPG's in the game and can outrun many of the tanks in the game. They also sport relatively great camouflage values thanks to their smaller sizes. This trend, aside from camo, remains throughout the line. The T9 and T10 artillery pieces are very fast indeed, able to relocate to newly freed locations on the map and continue to support their allies from unexpected firing angles and get closer to the battle to compensate for their low-velocity shells. They are also some of the best artillery at defending themselves and make good emergency TDs. At T10 the French get a unique SPG with a turret (the T9 SPG also has a turret) and a 4-shot autoloader. It boasts the second best accuracy of the bunch, and some very nasty burst damage, able to track and retrack tanks to keep the beating on and to give allies something to shoot at. However the splash and damage are as expected, underwhelming. The load time is also horribly long, at a whopping 70sec, so aim well. 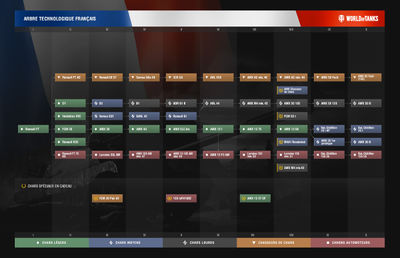