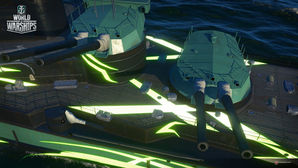 As this is an ARP ship, ARP Kirishima cannot mount any camouflages.