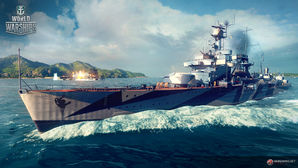 As a premium ship, Admiral Makarov doesn't have any upgrades to research.

As a premium ship, Admiral Makarov comes included with Type 10 camouflage that lowers her detection radius, reduces the accuracy of incoming shells, and increases the amount of experience she earns.

Nürnberg was a German light cruiser of the Leipzig class built for the Kriegsmarine. She was named after the city of Nuremberg and had one sister ship, Leipzig. Nürnberg was laid down in 1934, launched in December of that year, and completed in November 1935. She was armed with a main battery of nine 15 cm (5.9 in) guns in three triple turrets and could steam at a speed of 32 knots (59 km/h; 37 mph). Nürnberg was the longest-serving major warship of the Kriegsmarine, and the only one to see active service after the end of World War II, though not in a German navy.

In the late 1930s, Nürnberg took part in the non-intervention patrols during the Spanish Civil War without major incident. After the outbreak of World War II in September 1939, she was used to lay defensive minefields off the German coast. She was thereafter used to escort offensive mine-layers in the North Sea until she was torpedoed by a British submarine in December 1939. She was thereafter used as a training ship in the Baltic Sea for most of the rest of the war, apart from a short deployment to Norway from November 1942 to April 1943. In January 1945, she was assigned to mine-laying duties in the Skaggerak, but severe shortages of fuel permitted only one such operation.


After the end of the war, Nürnberg was seized by the Royal Navy and ultimately awarded to the Soviet Union as war reparations. In December 1945, a Soviet crew took over the ship, and the following month took her to Tallinn, where she was renamed Admiral Makarov. She served in the Soviet Navy, first in the 8th Fleet, then as a training cruiser based in Kronstadt. By 1960, she had been broken up for scrap.