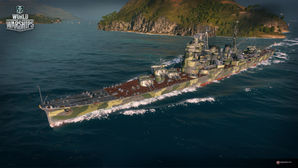 For the most part, Myoko is the first proper heavy cruiser within the Japanese cruiser branch; it brings together all of the lessons captains have learned playing through Furutaka and Aoba. Her impressively low detection range will most certainly aid captains in firefights with other cruisers. Her guns load relatively slowly, and getting into a medium range firefight with a fast firing cruiser — such as Cleveland, Shchors, or Fiji — is inadvisable.

Research is simple as you only need to research a couple of hull modules. The torpedo module should be researched last.

As a Tier VII IJN cruiser with access to four upgrade slots, the following upgrades are recommended for Myoko:

As a Tier VII IJN cruiser, players have access to the following consumables:

Premium Damage Control Party is recommended in case the player finds their rudder knocked out in a precarious situation. Defensive Fire is recommended for players with an anti-air build and Hydroacoustic Search for those looking to counter and or hunt enemy destroyers.

Players who wish to spend doubloons can equip Myoko with Type 17 camouflage that lowers her detection radius, reduces the accuracy of incoming shells, reduces her repair costs, and increases the amount of experience she earns.

As with other IJN cruisers on recommended signal flags, Victor Lima, India X-Ray and Juliet Charlie are the most recommended for extra fire damage. Victor Lima & India X-Ray increase the fire chance while also increasing chances of you getting flooding and being detonated, thus Juliet Charlie is used to counter the debuff effect. Sierra Mike can also be handy for getting around to places, as this increases Myoko's speed to a fantastic 36.8 kts. Equal Speed Charlie London, Dragon Flag, and Zulu Hotel can assist the player with increased XP gain per battle and faster commander (re)training.