In World of tanks, you will only face up to tier 2 tanks when starting at tier 1. Throughout the rest of the game, you should expect to battle tanks up to two tiers below and two tiers above you depending on the match. However, you may find yourself in a match with only your tier tanks.

When queuing for a game, a black box will appear showing the current number of players at each tier. This can be used to judge the likelihood of getting into a match where you are the maximum tier. Special events such as the T1E6-X giveaway may effect the general balance of the players at each tier so be aware of this and maybe avoid tanks one tier below the very active tier for the duration of the spike.

Some premium tanks have premium matchmaking. This is when they would be unable to play effectively in games with tanks two tiers higher. Therefore, they will only be able to fight tanks one tier above them at most. Examples include the Pz. 2 J, TOG 2 and Churchill 3. Team selection for random battles is done according to several parameters. Each battle takes place in a battle tier, which should not be confused with tank tiers. (On this page we always use Arabic numerals ("7") when discussing battle tiers and Roman numerals ("VII") when discussing tank tiers.) Team balancing within a battle tier takes place according to vehicle specific weighting and additional restrictions. 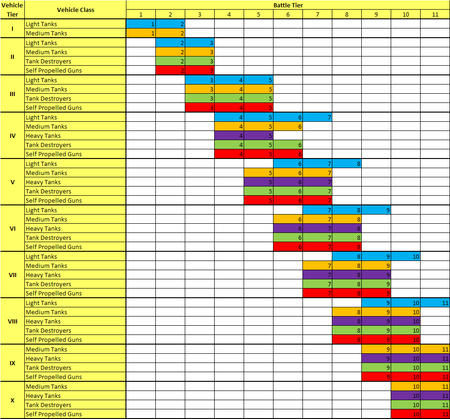 In the Version 8.5 update, a new Match Maker rule was planned for balancing Light Tanks. The rule was intended to balance out the number of Scout tanks on each team by balancing the weight of Scouts on both teams so they won’t differ by more than +/-20 vehicle weight points. The advantage to this rule is the matchmaker will no longer distribute a large number of scout tanks to one team and none to the other; the number of scouts should be roughly the same for each team. During tests, Scout balancing created other imbalances so it was not implemented. It is currently planned to be released with a later patch. The following vehicles are marked as Scouts: USSR: T-50, MT-25 Germany: Pz.Kpfw. 38 (t) n.A., Pz.Kpfw. II Luchs, VK 16.02 Leopard, VK 28.01, Aufklärungspanzer Panther United States: M24 Chaffee, T21, T71 France: ELC AMX, AMX 12 t, AMX 13 75, AMX 13 90 China: M5A1 Stuart, 59-16, WZ-131, WZ-132

Battle tier 12 (tier VIII scouts and tier X regular tanks only) was removed in Patch 8.11, in order to increase the number of tier 10 and 11 matches.