The Bishop feels like a major leap back after the versatility of the Birch Gun; you no longer have a full traversible gun mount, but are forced to deal with a very narrow gun traverse; it has a pitiful range for both guns; and it has a fatally tall silhouette. Its saving grace, however, is better protection and HP than its predecessors, being based on the hull of a Valentine, and its second gun is reasonably better than the 25-pounder. Play the Bishop like an SU-5; move up with the rear lines of your team, and bombard targets of opportunity. Even if you are spotted, you can survive a decent amount of fire while retreating.

The stock gun's poor range is actually due to the gun elevation rather than the gun's actual range. This also has the other effect of its shells travelling in a low arc, thus lowering damage. Thus, one way to get around these is to either move up with the team, or find an upward slope to position yourself. Having a high silhouette sometimes discourages the former, so it depends on how much risk the player is willing to take.

While the 25 pounder stock gun is not much different from the Birch Gun, the 4.5inch howitzer offers much more damage, but at the expense of not being able to equip AP ammo. Its shell trajectory is also noticeably lower. The heavy armour (for an arty) and high HP pool comes in handy when defending yourself in close quarters, although the slow traverse hinders that. The tall mounting of the gun lets you fire over low obstacles, making hull down an option. 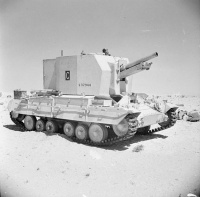