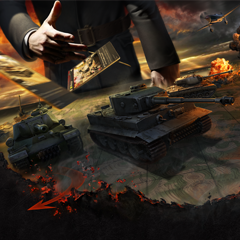 World of Tanks Generals is a free online card game dedicated to the battles of World War II. It includes more than two hundred cards with a set of unique features, allowing you to use a lot of tactics on the battlefield - from a massive offensive to sudden lightning attacks and protracted trench warfare

Being browser-based, World of Tanks Generals doesn’t require installing a game client. The game is available through any browser, whether on a PC, laptop or tablet, and also supports starting a game on one platform and finishing it on another. As long as you have a device with an internet connection, the battle will always be at your fingertips.

On April 15, 2016 Wargaming announced that development for World of Tanks Generals had ceased. While the servers will remain active, no further updates or improvements will be added.