Aircraft can be moved around the map using the overhead view (Left-Shift to toggle between overhead and 3rd-person view), or even on the Map view (bound to 'M' by default).

If you press and hold Shift, you can add waypoints with each left click on the map, up to 5 waypoints per squadron. The final waypoint can be an order to attack, guard, or land a squadron. All but the last waypoints must be move orders.

When driving an aircraft carrier, you will most likely (with a few exceptions) have fighter aircraft at your disposal. Fighters are represented by an in-game icon consisting of stacked bullets.

The bullets will be either solid or outlined, where the solid bullets represent remaining ammunition for that fighter squad. After a fighter squad has spent all of its ammunition, it must return to the carrier to re-arm.

The number of fighters in a squadron may vary by nationality. US carriers use 6-aircraft squadrons, while Japanese carriers use 4-aircraft squadrons. The number of fighters in a squadron are represented by a set of bars across the top of the squad icon (green for friendly, red for hostile). Solid colour bars (green or red) indicate fighters, whereas shaded transparent bars represent missing fighters which have either been shot down or where there were not enough aircraft reserves on the carrier to form a complete squadron.

To engage a fighter squadron, first select the squadron to use for attack by pressing the assigned squadron number. You can select multiple squadrons by holding down CTRL while you select the squadrons. Once the squadron(s) are selected, left-click on the enemy aircraft squadron you wish to attack to plot an intercept course directly to the target and have the fighters automatically engage once in range. You may also optionally plot a series of waypoints with the selected squadrons before clicking on the target enemy squadron. This may be useful to avoid enemy ship-based Anti-Aircraft fire, or perhaps to avoid other enemy aircraft squadrons you do not wish to engage.

Any enemy aircraft you shoot down will be recorded, and a ribbon will be displayed for each downed plane.

If you attack enemy fighters, all affected squadrons (one or more of your squads plus the targeted enemy squad) will stay in the same location once engaged. This can be used to your advantage if you are engaged within the Anti-Air screen of a nearby friendly ship, or conversely detrimental if you're engaged over enemy ships. You squadron will continue the attack until the enemy squadron under attack is destroyed or it disengages from the fight. You can disengage from a fight by giving your squadron(s) a new waypoint or a different target. Note that the enemy fighter squadron will still be attacking your squadron if you disengage, even if you choose to engage a different target, until otherwise directed by the enemy fighter squadrons captain.

If you attack enemy bombers, all the affected squadrons will first intercept the target squadron and then cause the squadron under attack to slow down slightly. Bombers cannot target fighters, but they can defend themselves if they have the capability, so it is possible to take losses when fighting enemy bombers. The enemy bombers will continue on their course, or adjust course if directed by their captain, and your fighter squadrons will automatically follow and continue the engagement until the enemy squadron is destroyed or given new orders.

While being attacked by fighters, an enemy bomber squadron's accuracy is significantly affected. Depending on whether it is a dive bomber or torpedo bomber squadron, the dispersion indicators for the affected squadrons will be roughly twice as large, meaning it will be much harder for the enemy squadron to accurately place ordinance. This accuracy effect only lasts while the enemy squadron is under active attack. It does not apply until a fighter squadron has reached and engaged an enemy squadron, and the effect will end if you disengage the attack. It can be an effective tactic to target bomber squadrons which have not yet dropped their ordnance in order to mitigate the potential damage to ships in your fleet, as opposed to bombers which have already attacked and are returning to their host carrier. 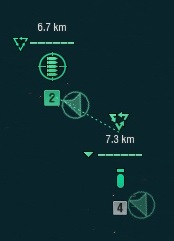 Fighters have a special ability called strafing. It is a form of manually targeted attack which expends a significant portion of the fighter squadrons ammunition in a concentrated area. If successfully applied to areas where enemy aircraft squadrons are located, it can quickly reduce enemy squadron strength. 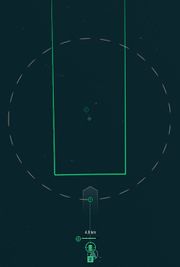 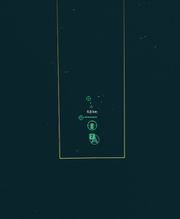 Unlike main guns, or surface secondaries, AA guns do not have ballistics calculations for each individual shell as that would overload the game servers; the tracers that are visible in-game are purely cosmetic. Instead, AA works like an aura around the ship, which affects enemy planes that enter it. The auras are divided into short, medium and long range auras which overlaps one another. The closer the enemy plane approaches to the ship the more auras will "engage" the plane. Each weapon type has its own aura range and average Damage per Second (DPS) value. For example, below is the AA complement of the Pensacola (Hull B):

The AA aura for dual-purpose (DP) guns, such as the 127 mm on the Pensacola, persists even if the guns are firing at surface targets. They can perform both functions simultaneously, rather than alternating between surface and air engagements as they would in real life.

The DPS and range of AA guns can be increased by equipping certain upgrades and training certain commander skills. There are also two in-battle methods of increasing DPS. The first is by setting an enemy squadron as a priority target by using CTRL + LMB on the squadron. This will increase the DPS of all AA by a factor of 1.5. The second is by activating the Defensive Fire consumable (available on most cruisers from tier VI and up, as well as on American destroyers from tier V and up), this will increase the DPS of long range AA aura by a factor of 6. Both methods will also stack, therefore setting a squadron as a priority target and activating the Defensive Fire consumable will increase long range AA DPS by a factor of 9.

For each AA gun that is destroyed, the total DPS for the corresponding aura will also be reduced. The AA guns have no limit to their engagement arc, regardless of which way the ship is facing the aura will always cover a 360° area around the ship. An example of how AA aura affects enemy planes

Although the AA guns are assigned DPS values, it does not represent the amount of damage it can deal to enemy planes. Similarly, the survivability statistic for planes do not represent its hit points. The guns do not deal any actual damage, while the planes have no hit point pool. Instead, DPS and survivability are used to calculate the chances of shooting down a plane in a squadron. Using the previously mentioned Pensacola as an example, a squadron of enemy Martin T4M torpedo bombers (970 survivability) enters the range of its 40 mm Bofors and 127 mm DP guns (total DPS of 132). Every second the bomber stays in the AA aura, a roll is made to determine whether the squadron loses a plane. In this case the probability of shooting down a plane would equal to something like 132/970 = 0.136 = 13.6%/sec. On average, a full squadron of six T4M bombers would be shot down in around 47 seconds. Although the chances are extremely slim, it's theoretically possible to shoot down a full squadron in just a few seconds. If the Pensacola set the squadron as a priority target using CTRL + LMB and activated its Defensive Fire consumable, the DPS of its 40 mm Bofors would increase to 162 (108*1.5), while the DPS for 127 mm guns would increase to 216 (24*1.5*6). The total DPS against the bombers would now be 162+216 = 378, and the probability for shooting down a plane increased to 378/970 = 0.39 = 39%/sec, a considerable increase over the previous figure.

The AA aura of each ship interacts with the enemy squadrons independently, even when the auras intersect. The DPS from each ship's individual aura does not get added with one another, however having multiple auras engage the same squadron effectively results in having more rolls made against it, thereby increasing the probability of shooting down the planes.

AA (and secondary) guns can be switched off using the P key by default. This is mostly used by destroyers in case it needs to maintain concealment. However, this is only useful if destroyer is equipped with medium to long range AA guns, as a destroyer with short range AA only usually has less range than its detectability range by air. There are however, valid reasons for switching off AA other than to maintain low detectability. It is sometimes more beneficial to let a squadron that has dropped its ordnance to return unharmed as it will take longer for it to get back to the carrier to resupply as opposed to shooting it down which will allow the carrier to launch a new squadron sooner.

Retrieved from "http://wiki.wargaming.net/en/index.php?title=Ship:Aerial_Combat&oldid=227559"
Your location:
To log in, select the region where your account is registered
CIS Europe North America Asia Republic of Korea
Or use Microsoft Login to enter WoT XBOX ecosystem
Log in