Armored fighting vehicles designed by or imported into the Union of Soviet Socialist Republics. USSR tanks will often fall into a role-set that each class will excel at, but at the expense of being notably less capable if called into other roles at any time. The USSR designed and fielded several of the most recognizable, and in some cases ubiquitous, tanks in the history of armored warfare.

Soviet light tanks are typically the fastest tanks at their tiers. Like most Soviet tanks, they have a small frontal profile and sloped armor. While the recent map and class changes that having shifted the game paradigm to a more brawl-focused ideal and reduced their relative power in general, they're still solid choices

Soviet medium tanks are fast and maneuverable, and equipped with accurate guns with excellent dispersion values, unlike the other lines in the Russian tree (and get even better in high tier). Most are jacks of all trades and very versatile. Unfortunately, most suffer from poor gun depression, limiting their ability to go hull down and make use of their strong frontal turret. They also have excellent soft stats such as ground resistance and camo, allowing them to perform the roles of scouting, damage dealing, and flexing across the map adequately. There are two medium lines that split after the T-34 at Tier V. One line has forward or center mounted turrets with average guns but the better chassis allows them to be more flexible. The mainly rear mounted turret line has superior firepower, but at the cost of having less gun depression and inability to take advantage of many hull down positions.

Soviet heavy tanks have good guns, are fast, and have strong armor; their frontal armor thickness makes them quite difficult to penetrate from the front unless weakspots are targeted, and their sloping can lead to bounces even from high penetration guns. There are two lines: the KV line which offers thicker armour and standoff potential at the cost of mobility, and the IS line which has armour more reliant on angles, but better agility and alpha damage for brawling. They tend to lose out in gun handling, accuracy and DPM compared to other heavy tanks, but their prolific alpha make them excellent at peek-a-boom and side-scraping fights.

Soviet tank destroyers generally have poor armor, but they have some of the best camouflage values in game. They're ideal for damage farming and sniping early game, and occasionally acting as makeshift assault guns later on. There are two Soviet TD lines. The more popular Object 268 line favors alpha damage, but traverses very slowly and has subpar viewrange. They also have very weak armor anywhere besides the gun mantlet, though it is strong enough to prevent penetrating hits from most non-artillery HE shells. The Object 263 line which favors mobility and some of the fastest aim times on tank destroyers. The armor is somewhat better but lucky bounces from same tier tanks are relatively rare still. Both require patience in their game-play, and like the light tanks, have also received some harmful changes, but continue to remain relevant.

Soviet self propelled guns are generally quite accurate but don't do much damage. although not so much as the French. However, they also generally fire their shells in a very high arc, making their flight time long, but able to hit tanks hiding behind rocks and small buildings. They also tend to have higher firing rates than their foreign counterparts. This changes from about Tier 7 to 9, where they become much more alpha-centered, while retaining the high arcs that only the British SPGs really beat. 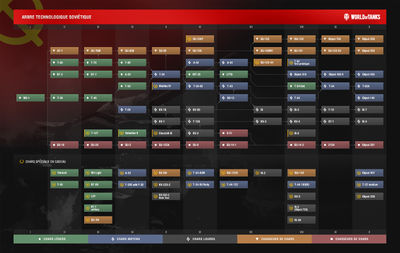