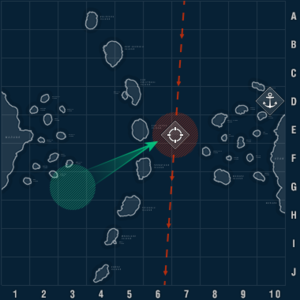 Operation Aegis is a PVE Scenario which has the friendly task force intercept an enemy convoy. Players are tasked with rescuing allied ships from the enemy convoy and escorting them to their destination. Players may take only Tier VI ships. The allied force consists of 7 player ships and 3 NPC ships: 1 Shchors, 1 Mahan, and 1 Baltimore. 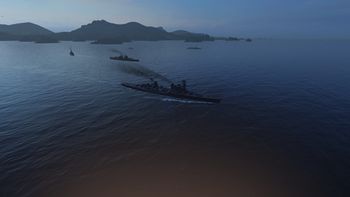 Upon spawning, players will find themselves among a group of allied players, along with Shchors, which is carrying the task force commander, Captain Akulov. When players begin heading North, they will encounter the first enemy attack wave. This wave will be traveling from North to South on the center line of the map. By defeating this wave of enemies, players will have captured the strategic area. From this point onward, players must defend against a second force which will attempt to recapture the strategic area. These ships will enter the combat area from the Northwest. After defeating these forces, players will encounter an enemy convoy which is escorting five Liberty transport ships. Players must sink the captor ships and escort the Liberty ships to the waypoint. Here, players will encounter two final attack waves. Players must repel the attacking ships while escorting the Liberty ships to safety.

If enemy escort apporaches the strategic area, 3x Battleship (Amagi, Fuso and Kongo) will enter the combat zone from the north.

Retrieved from "http://wiki.wargaming.net/en/index.php?title=Ship:Operation_Aegis&oldid=313098"
Category:
Your location:
To log in, select the region where your account is registered
CIS Europe North America Asia Republic of Korea
Or use Microsoft Login to enter WoT XBOX ecosystem
Log in