Scenarios, available from the Operations battle type, are a Player vs. Environment (PvE) game mode in which seven players team up to complete several tasks. Similar to random battles, excellence in battle is rewarded. Poor performance in battle will lead to reduced rewards or may result in a loss. Teamwork should be prioritized to have the best chance of winning. In Scenarios, there are multiple objectives. The primary objective must be completed in order to win the Scenario. In addition, there are secondary objectives which reward players with additional Credits and XP upon completion.

The first, common mode, is using a MatchMaker. A team assembles, either as a division or randomly, and the MatchMaker determines top Operation to be played and the strength of the opponent AIs, based on the ships comprising the player team.

The second, team-selected mode, allows a division of a minimum size (currently four) to select the Operation that it will play. Again, the strength of the opponent AIs is determined by the MatchMaker, based on the ships comprising the player team. 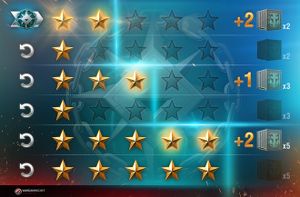 Scenarios let players create Extended Divisions, a Division containing four to seven players exclusive to Scenario mode. A single player, or a division, can queue into the common mode

The game will help fill out a Division that queues with less than seven players. Players can disable this function by clicking the lock icon on their Extended Division. There is an in-Port chat channel called "Operations" where you can look for players to form a division.

The amount of credits and experience earned from an Operation depends on the number of completed objectives and your battle performance. Average earnings per battle fall between the earning averages of Co-Op and Random battles.

Sunray in the Darkness

Terror of the Deep

In September 2022, the Operations were significantly overhauled. The weekly rotation of a single Scenario was replaced with a random selection from eight possible Scenarios, restoring the "Season 2" Scenarios The Ultimate Frontier, Hermes, and Cherry Blossom that had been unavailable for several years. The 30-minute cool-down after using a ship in Operations was removed, and the one-time rewards for completing a particular Operation were replaced by weekly combat missions that awarded Community Tokens and a Supercontainer. Captains could now enter with any ship from Tiers VI, VII, and VIII. Creating a division still allows captains to select which Scenario they want to play.

Originally, players were awarded a star (

) for each of the five secondary objective completed, but only if they accomplished the main objective. A star earned one-time rewards ranging from signal flags to experienced commanders to premium account time. At the end of each Scenario, a splash screen appeared that broke down the results and rewards. No additional rewards were granted for completing the Scenario again and earning the same number of stars.

With the release of Update 0.10.8, any stars earned in Operations were reset. Stars their corresponding reward could be earned again.

In Update 0.11.8, the stars were removed and instead secondary objectives rewarded additional Credits and XP. The completion or failure of a secondary objective is displayed on the end-of-battle splash screen with checks and Xs instead.

Retrieved from "http://wiki.wargaming.net/en/index.php?title=Ship:Scenarios&oldid=325400"
Categories:
Your location:
To log in, select the region where your account is registered
CIS Europe North America Asia
Or use Microsoft Login to enter WoT XBOX ecosystem
Log in