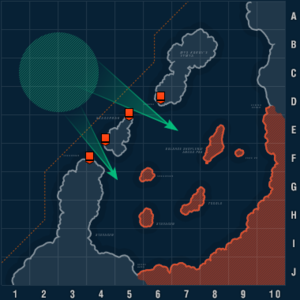 Players must attack and destroy enemy ships and facilities in the base.

Operation Killer Whale is a PVE Scenario which has the friendly task force raid an enemy base. Players are tasked with destroying enemy ships and base structures, such as forts, and may take only Tier VI ships into the operation. The allied force consists of 7 player ships. 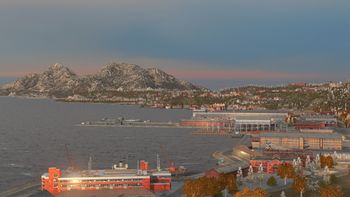 Upon spawning, players will find themselves taking part in a daring raid on an enemy base. Players must enter the base through channels which are guarded by forts. Inside the harbor there will be several targets including warships, support ships, and on-shore facilities. The operation aim is to destroy these targets. During the raid, enemy reinforcements will appear outside the harbor. Players must repel the reinforcements and fight their way out of the base. To complete the operation, players must escape to the designated area, either in the West or Northeast of the map.

A special guest (Commander Jenkins on Destroyer Farragut) might spawn with your team. If he survives the battle (and your team completes the scenario), you get a special achievement!

Note: Enemy warships which must be destroyed for a primary or secondary task are marked with a red target circle above them, and have a small red circle around them on the minimap.

The player team normally consists of 7 players, and start outside the harbor near D3/C4. On rare occasions you may be joined by Commander Jenkins in a Farragut. This is a non-player ally. If the team completes the mission and he survives, eveyone who hasn't had it yet gets the Save Commander Jenkins achievement. This achievement can be obtained only once.

The first opposition will be the forts guarding the harbor entrances. There are 9 forts in total: 2 on each of the south, middle and north entrances, and 3 inside the harbor. The two forts on the north entrance can usually be ignored. The forts do not hit very hard but are persistant and can do a lot of damage if left alone. They have very strong AA guns and should be avoided by aircraft. A full battleship AP salvo can destroy a fort in one shot. Cruiser AP will not penetrate. They should use HE, and maybe switch to AP at short range (less than 5km). Destroying forts is part of the "Destroy all forts and onshore facilities" secondary task.

There are 6 ships inside the base. These must all be destroyed for the first primary task “Destroy all enemy ships at the base”, and focus of the team should be, next to the forts, on these ships. A Nassau battleship and a G-101 destroyer will spawn at I4. They are only tier III, but the Nassau's secondaries are very dangerous and will rip apart any cruiser that comes within range, and the G-101's torpedoes will be a nasty surprise for any ship trying to go through the south entrance. Try to destroy the G-101 before it hides in smoke. A Kolberg tier III cruiser at J6 will move in towards the players, and will usually first appear from behind the small island at H5/6. Near the middle a Karlsruhe tier IV cruiser will appear at F7, and fire on and launch torpedoes toward ships at the middle entrance. In the docks at J7 there will be a König Albert tier III battleship which also moves in on the players. Also in the docks is a König tier V battleship. This ship will not leave the dock, but will use its guns and AA. It is hard to torpedo from the east side, where it is protected by a harbor mole. Torpedoes fired from the west have a better chance of hitting this target.

After these ships are destroyed, the second primary task “Withdraw to the designated area with at least half of of the operational ships” will be triggered. The exit point will be marked on the map, and is usually in the west at F1, but is sometimes in the north, at A8.

One of the secondary tasks is the destruction of 5 support ships. These are Cimarron freighters which start in the docs at I7 and will head out toward the habor exits, trying to escape. They have no weapons or armor, and are very easy slow-moving targets. With only 15000 health points they can easily be destroyed with a few HE shots. Using torpedoes would be overkill. Players should ignore these until the enemy warships and forts are all destroyed.

Lastly there are the 11 onshore facilities. These are spread out along the harbor coast from I4 to F10. They are marked on the minimap as small red circles, and show a clear name and health bar, just like ships do. With only 5000 hitpoints each these can also be quickly destroyed with a few HE hits. Armor piercing rounds will hardly do any damage. The destruction of these facilities is also part of the "Destroy enemy forts and onshore facilities" secondary task. With 11 facilities and 9 forts there is a total of 20 targets. Only 18 of these need to be destroyed for the task. This is why the two forts on the north entrance can usually be ignored.

With 12:00 left on the clock, enemy reinforcements will arrive. By this time the team should have destroyed all hard targets and be mopping up the last of the Cimarron transports and the onshore facilities, or better still, be moving into position to fight the reinforcements. Two more secondary tasks become available: “Destroy battleships Furi and Dono” and “Destroy the enemy's first and second reinforcements groups”. Again, the targets for these tasks will be marked with a red circle above their name. Most of these ships will spawn outside the harbor near the north-west map border, but two of them will spawn in the north at A8/9. The two ships in the north will usually make their way south on the inside of the harbor, east of the large island. The other enemy ships will normally move at full speed from their spawn point diagonally towards the harbor. As soon as they encounter opposition they will turn around and fight using the usual bot patterns.

With 11:30 left on the clock the final secondary task is added: “Do not let enemy reinforcements enter the haven”

There will be two target ships, a V-25 and a Kolberg in the first wave, and two, a Kolberg and a Kaiser in the second wave. The "Fury" will spawn at the same time or shortly after the first wave, and is accompanied by a Wakatake tier III destroyer. The "Dono" will spawn between waves 2 and 3, with 08:00 on the clock, and is accompanied by a Tenryū tier III cruiser. The destroyers, having a small detection range, will usually not be visable until they are near the south entrance. The third, forth and fifth wave will consist of various ships (Kaiser, Karlsruhe, Königsberg, V-170, T-22, Nürnberg, Bayern, Gaede), with 3 or 4 ships in each wave, and appear on the west and north edge of the map.

The waves of reinforcement will arrive regularly every 2:45, the first with 12:00 left on the clock and the forth at 03:45. The last wave is slightly earier at 01:45. In between the second and third wave the Dono will spawn. Waves 3, 4 and 5 will usually each consist of a battleship, a cruiser and a destroyer. Each wave will be one tier higher than the previous one.

Note that after destroying the target ships for the secondary tasks there is no reason for players to stick around. The main priority will be getting enough ships into the exit zone. The more time the team takes to destroy the main targets, the bigger the risk they will be overwhelmed by the waves of stronger and stronger reinforcements, and fail the primary task. Note that some reinforcements spawn quite close to the exit point, and might destroy player ships already in the exit circle. If things go bad, it is wise to no longer persue any secondary tasks but focus on the primary: get to the exit.

For the operation to succeed (and get any stars from secondary tasks) the primary task must be fulfilled: getting enough ships to the exit point. After the first primary is completed by destroying the six fighting ships in the harbor, the main primary becomes available and the exit point is marked on the map with an anchor. It is most often at F1 (in the west), but sometimes at A8 (in the north). Around the exit point will be a green circle. Ships must be inside this circle to count for the primary task condition. For a ship to count as inside the circle, the centre of the ship must be inside the circle.

The operation ends with a succes if:

The operation fails if either:

The most difficult part of this condition is to reach it before the clock runs out. If the team is slow in entering the harbor, destroying targets inside the harbor, or late in getting out of the harbor again, or spends too much time chasing the targets for the secondary tasks, it may happen that only one or two, or even none of the player ships reach the exit circle before the clock reaches 00:00.

Sometimes it may be necessary for a player ship to be destroyed to complete the mission. For example: suppose there are 5 ships left. Two are already in the circle, two are on their way but probably won't make it in time, and one is far away and will never make it. With 2 out of 5 ships in the circle, the condition for success is not met. But when one of the ships outside the circle is destroyed, there will be 2 out of 4 ships in the circle, which means the game immediately ends with a success. That, in turn, means it is the duty of those ships to commit suicide.

Usually the best way to get killed is to be near enemies, turn your broadside towards them and slow to a stop. Don't fire at the enemy, you might destroy one before they have the chance to destroy you. Pretty soon you will be hit by multiple shells in the citadel and multiple torpedoes to send you to Davy Jones' Locker. The team (and you) will have succeeded the mission. If you fail to die, the team will have failed the mission. No stars for anyone, including you.

It is recommended that, when you have reached the circle, to move to the extreme end, away from the enemy, give a good defensive angle towards the enemy, and stop firing your guns. The aim is to not be targeted by the enemy, lowering the chance of being destroyed. In some cases you may want to fire at the last remaining secondary targets. Or try to destroy that destroyer that just spawned nearby, and maneuver to avoid its torpedoes. Use your best judgement.

One situation where it might be wise to delay the end of the game is when the team has nearly completed the secondary tasks, but needs one more minute or so to destroy that last target ship. But beware of that 5th reinforcement group of tier VI ships that spawn near the exit points. One minute you might be this close to a 5-star success, the next some of the ships in the exit circle are destroyed and you have no hope of winning.

Retrieved from "http://wiki.wargaming.net/en/index.php?title=Ship:Operation_Killer_Whale&oldid=311586"
Category:
Your location:
To log in, select the region where your account is registered
CIS Europe North America Asia Republic of Korea
Or use Microsoft Login to enter WoT XBOX ecosystem
Log in