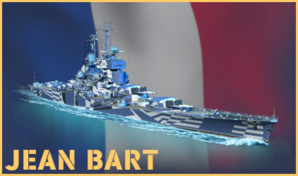 A Richelieu-class battleship known for her high speed and powerful anti-torpedo defense. In the process of her completion in the late 1940s, she received the most advanced anti-aircraft artillery systems for that time, which significantly increased the ship's AA defense.

Jean Bart is the Tier 7 premium French Battleship. Equally in resemblance with the tech tree Tier 7 Richelieu, the Jean Bart is considered superior in battle and for good reason. Owing to some key differences, and a more flexible nature it is a deadly ship in the right hands.

The main guns is where the powerhouse starts with 2x4 380mm quad turrets setup, with a respectable 1.8 sigma, the guns have enough penetration and accuracy to reliably hit targets at mid to long ranges. But the Jean Bart is not made to be in long range duels. Owing to her quick reload of 26 seconds and a fast turret traverse it can more than perform in mid to close range duels. The ship's distinctive feature is the MBRB (Main Battery Reload Booster). This halves the reload time and has two charges. Effective use of this consumable allows for more flexibility and target prioritization for the players.

Jean Bart is a natural flanker. This does not mean it is a brawler. While she can bounce every caliber shell off her nose up to 458 mm, her sides are very weak, especially under the turrets, and showing any broadside will be punished severely in most cases. The ship has speed boost which greatly increases its speed, and that along with her front facing guns allows it to support and clear flanks to surprise enemies from behind.

Although it allows versatility in playstyle, the Jean Bart is best used as a high speed, quick firing battleship to lead flanks and support pushes, to come up behind the enemy lines and disrupt the enemy.

Retrieved from "http://wiki.wargaming.net/en/index.php?title=Navy:Jean_Bart&oldid=295603"
Categories:
Your location:
To log in, select the region where your account is registered
CIS Europe North America Asia Republic of Korea
Or use Microsoft Login to enter WoT XBOX ecosystem
Log in