For driving the ship, see Maneuvering.

When guns are selected:

When torpedoes are selected:

Keys of controlling aircraft are the same as a ship. A and D controls the direction of aircraft (i.e. left or right) The W key is used for boost. However, the engine will slowly become overheated, then you will have to wait until it cools down. The S Key allows you to slow your aircraft down, this will also heat up your engine.

The recording of battle replays is enabled by default. The last 30 are saved in the /World of Warships/replays folder with the file type .wowsreplay. When a new battle is played, a new file is created and the oldest file in excess of the maximum number saved is deleted.

The saving of replays can be turned off (they are surprisingly small, so there's little need to do so) or the number saved adjusted using mods available in such as the ModStation.

Replay files may be uploaded and downloaded at replayswows.com.

To watch a replay, the .wowsreplay file type must be associated with the game client in which it will be viewed. Typically, this is the /World of Warships/WorldofWarships.exe file.

If .wowsreplay files are not associated to the game client, the first time a replay file is double-clicked or Opened from the context menu (right click), a dialog will be displayed asking for an association.

To watch, ensure that the game client is closed. Start the replay by double-clicking on the .wowsreplay file. The game client will open, this time displaying your replay.

The majority of these options are specifically for Free cam mode, so if you are wanting to watch the battle from a tournament-style view, you’re going to want to just start off in the free cam mode -> <Ctrl + Shift + Backspace>.

Snapshot data is stored in an XML file that is created in the same folder as the replay and has suffix _params in the <snapshots> block. The file will appear only if there is data it should store. In case with snapshots it will appear after the first snapshot is created. XML file is tied to the replay and may be freely transferred with the replay file to other people, who then can use those snapshots.

A snapshot is created by pressing F5. This saves the timestamp of the replay, camera position and other parameters, and creates a record in the XML file in the snapshots section.

Switching between snapshots happens in the following way:

To delete snapshots, edit the XML file and delete the snapshot records.

Snapshots are existing and loaded on the replay-by-replay basis. So, the controls switch to the snapshots of the exact replay.

When snapshots are used, the following parameters are restored:

Also the replay is paused after loading the snapshot.

The game uses little energy when one of these conditions is true:

Sounds in the game are generally grouped into Sound Effects (SFX), Ambient sounds (such as waves lapping), Voice communications, Engine noises, Gunfire, Music, etc. The following is a description of the controls for game sounds.[4] 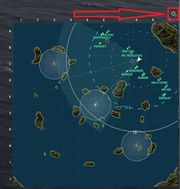 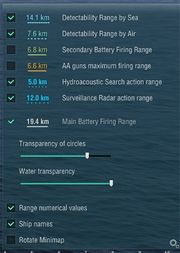 An early version of a replay files control mod: WoWs Replays Tool. 2018
A brief guide to replay and free camera controls 12-Mar-2020.
Replay Controls and Features as of 0.9.6, including more details of snapshots. July-2020

Retrieved from "http://wiki.wargaming.net/en/index.php?title=Ship:Controls&oldid=303374"
Categories:
Your location:
To log in, select the region where your account is registered
CIS Europe North America Asia Republic of Korea
Or use Microsoft Login to enter WoT XBOX ecosystem
Log in