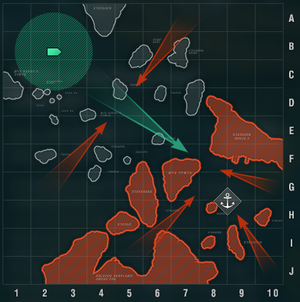 Players must break through tough enemy defenses to reach the landing zone.

Operation Narai is a PVE Scenario which has the friendly task force tasked securing the landing zone for troops embarking on a shore assault. Players may take Tier VII ships into the operation. The allied force consists of 7 player ships.

As of 0.7.2 this operation was made unavailable. It was restored in modified form with Update 0.7.7. This article describes the pre-0.7.2 version.

A fleet of landing craft are ready to ready to take the beach, but that beach isn’t undefended. Several groups of enemy warships, plus an aircraft carrier, lie in wait. The landing fleet has five transport ships headed by a lead vessel. All of those ships have assault troops aboard. Every hit those vessels take will result in troop loss, so it is important to protect these ships at all costs. The lead transport ship can repair ships in her radius, but her primary focus is capturing the Repair Dock at the enemy base. Once captured, the Repair Dock will help defend the landing zone and perform nearby repairs. Once players break through the enemy lines and reach the landing zone, they will have to deal with the shore defenses. Deal with these quickly to protect the transport ships to make sure the troops complete their landing. Around this time, an enemy transport group will attempt to escape from the nearby bay. Take out the ships to accomplish a secondary objective.

Retrieved from "http://wiki.wargaming.net/en/index.php?title=Ship:Operation_Narai&oldid=278230"
Category:
Your location:
To log in, select the region where your account is registered
CIS Europe North America Asia Republic of Korea
Or use Microsoft Login to enter WoT XBOX ecosystem
Log in